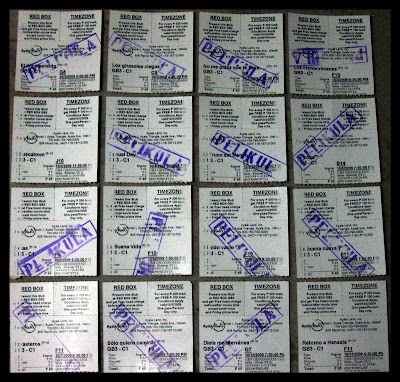 The ongoing Spanish Film Festival at Greenbelt 3 (Official Selection) is definitely a first-rate pit stop. This year’s line-up is comprised of a vast variety of contemporary Spanish/Latino films. Just know your genre and most likely you’ll find a movie that best suits you. On top of that, the festival is very much organized. The dreaded queues evident in those film festivals held at The Shang are gone and the minimal ticket admission for P65 is not bad at all for reserved seating. Flyers containing the schedule are always available and a raffle ticket (validated after watching five films) could win you a prize. Souvenir shirts can also be purchased at P250 each. One screening I had attended to even had a Q&A session with the director. Aside from Greenbelt 3, they also have screenings at CCP for documentaries done by Filipino filmmakers and at College of St. Benilde for the key films of master directors like Pedro Almodovar and Luis Buñuel.

Below are some notes on the films that I have watched (synopses can be found in www.pelicula.ph):

1. Animation – Manuel Sicilia, Raul Garcia and Jose Enrique Machuca’s “El Lince Perdido” (The Missing Lynx: Paws of the Run). Too Disney for me (complete with a radio-friendly theme song at the very end) but the output is enjoyable enough. This honest-to-goodness tale about endangered species posted one question: Why can’t we make a decent full-length feature animation this good?

2. Period Drama – Jose Luis Cuerda’s “Los Girasoles Ciegos” (The Blind Sunflowers). Spain during the 40’s is the perfect crib for the film’s theme on sexual tension that borders on religion and socio-politics. At times stagey, the old-school filmmaking is pragmatic enough to sustain my interest. For sure, I’ve seen something like this before.

3. Romantic Comedy – Albert Espinosa’s “No Me Pidas Que Te Bese Porque Te Besare” (Don’t Ask Me To Kiss You, Because I Will). If the film chose to be a little more focused, I would appreciate it regardless of being Star Cinematic in scope. Topics such as having cold feet days before the wedding day and being haunted by the ghosts from the childhood past are just a few of those tackled in the film.

4. Fantasy – Nacho Vigalondo’s “Los Cronocrimenes” (Time Crimes). There are a couple of films done already about time traveling but this one offers a fresh take on the matter. You’ll be surrpised that this engaging and effective film is composed of roughly four actors only and with no CGI in hand. How about that for a fantasy film?

5. Black Comedy – Juan Flahn’s “Chuecatown” (Boystown). Reminiscent of Pedro Almodovar’s comedy with multiple hysterically maternal characters, this film is probably the line-up’s most colorful entry. Plot is a little “In My Life” with a dash of black comedy.

6. Office Drama – Max Lemcke’s “Casual Day”. This is my third best pick from the lot. It’s a real-time film that tackles office politics and ethics. Generally talky and a bit dragging, it deals with a microcosm of the world outside the walls.

7. Cinema Verite – Santiago Zannou’s “El Truco Del Manco” (The One-Handed Trick). Modestly Western in terms of pacing and musical scoring, this film embarks upon a neighborhood of thugs on their misadventures with drugs, survival and friendship. This is undeniably my second favorite.

8. Crime Drama – Rodrigo Pla’s “La Zona”. I almost missed this Clint Eastwood-ish film, thanks to a mini-buffet served before the screening in recognition of the ambassadors of Spain and Mexico. This top pick of mine also voted as this year’s Audience Choice and, as of this writing, will be having an extra screening on the last day. It’s one of the rare films that seamlessly discuss social divide in a very accessible and gripping way.

9. Apocalyptic Film – F. Javier Gutierrez’ “Tres Dias” (Before the Fall). I can say that this is the most Hollywood of all the entries in terms of treatment in filmmaking. A reminder of the likes of “Deep Impact” or “Armageddon”, the film compounds two upcoming apocalyses: a meteorite that will hit the Earth and a ghost from the past.

10. Social Commentary – Andres Wood’s “La Buena Vida” (The Good Life). Except for the storytelling approach that is deemed trite in world cinema, this film is a winner on its own right. Colorful subplots, superb acting ensemble and a taste of Chilean present-day life are just a few ingredients that make up this film.

12. Historical Drama – Helena Taberna’s “La Buena Nueva” (The Good News). As mentioned in the prelude of the film, this one is based on real events. It is about a young priest assigned in a small war-torn town in Spain. Both the theme and direction are very much Joel Lamangan.

13. Concept-Driven Film – Ventura Pons’ “Forasters” (Strangers). I’m disappointed with this one for the simple reason that I have seen a Ventura Pons film before and it was very linear. This film documents two timeframes of families living in an apartment, acted by the same set of able artists.

14. Action Film – Agustin Diaz Yanes’ “Solo Quiero Caminar” (Just Walking). First things first, I was entertained with this one eventhough an annoying seatmate kept on reminding everybody that it’s a Spanish film equivalent of a Quentin Tarantino film. Its women-with-balls theme works for me without being too sell-out or too mainstream.

16. Social Relevance – Chus Gutierrez’ “Retorno A Hansala” (Return to Hansala). The last film I’ve seen in the line-up highlights human smuggling from Morocco to Spain as the two countries serve as a gateway between Africa and Europe. Here’s hoping that viewers will be treated more of similar eye opener films.
Posted by Manuel Pangaruy, Jr. at 12:13 PM