- P1,500 is cheap if you know that in high street, the ticket costs P3,000 (the cheapest from a price that summits at a whopping P20k!). I got the ticket from Zarah whose dad backed out on the last minute. She, by the way, got her tickets from a friend in Smart (clever!);

- The concert started at exactly 20 minutes past eight in the evening. PICC-ing was last done ages ago;

- I was wearing my office get-up (black tops with pinstripes, gray pants). My peeps observed that I was too formal (for code reviewing and internal designs?). I gladly confirmed that, yeah, I was too formal and, yes, I will be watching Josh Groban that night. I intended not to share the ticket price for them to keep on guessing that maybe I bought an expensive ticket but was too shy to admit (ha-ha!);

- Josh is as tall as the geeky-looking guy from his album covers. Manila cheered and screamed for him even before the opening song which I didn’t know the title;

- Most songs are from the latest album “Awake”. I realized that I was watching Josh Groban live when he sang “You’re Still You” and other hits;

- "The Prayer" was beautifully sung with our very own Lani Misalucha;

- We were seated in the balcony’s Row A (which could be misleading since it’s at the front row located in the left most part of the hall). It’s a relief though when Josh played the piano from time to time and he had to face our side;

- T-shirts cost P800 to a grand, depending on the length of the sleeves. I got the black one with Josh Groban on it, sitting on a corner of what seems like a cheap motel bed with the word “Awake” on his feet. The list of the concert stops for this leg is printed on the back (Australia and Philippines only);

- His last song was Michael Jackson’s “She’s Out of my Life”;

- The show’s almost smooth except for a scene with a mom and her little daughter. In between staged encores, the mom in red dress put her hija on the stage’s edge and was joined by Josh out of politeness. The kiddo gave Josh a bunch of flowers but she was not smiling and was not overwhelmed at all by what was happening. It was obvious that the cute girl was forced to do this act as the mom captured the moment with a digital cam. The mom later on single-handedly took another photograph, this time only with her and Josh. This part of the show ended when a Caucasian security staff gently put the kiddo down (while the mom was perhaps checking if the photos that she took were OK);

- I particularly like the live version of “You Raise Me Up” though I was expecting some bagpipes and that too Irish intro (which always makes the Westlife version authentic);

- Four nights after, I am still dreaming of buying a Lucia Micarelli CD which I won’t be getting until next payday.
Posted by Manuel Pangaruy, Jr. at 8:38 AM No comments: 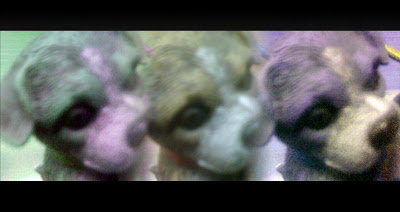 Paalam at text you later, alligator.

Nagmamahal,
Oso Camacho
Posted by Manuel Pangaruy, Jr. at 8:32 AM No comments:

A Pretentious Take on Pelicula 2007 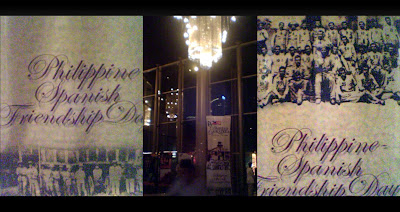 One of the things that I love being here in the metro is watching film festivals sponsored by some foreign cultural centers like Instituo Cervantes, Japan Foundation, Alliance Francaise and Goethe Institut for a minimal fare if not for free. I haven’t been to a weeklong German Film Fest here yet but I had my share of adventures with Eiga Sai (at one point, they were screening films at PCI/Equitable’s basement auditorium), French Film Fest (even before Ayala Center has THX cinemas, there was Louie’s THX Cinema in Milelong Building) and Spanish Film Fest (always conveniently screened here in Makati).

As for the latter, below are some peliculas that I have seen at Greenbelt 3 (film fest schedule was from October 1 to 14) for P65 each:

1. Los Ultimos de Filipinas/The Last from the Philippines – A good way for me to start the festival, a sumptuous appetizer for what was about to come. The film was done in 1945 and in B&W. There’s something good about this war film. It tackles the struggles of the last Spaniard troop in the country specifically in a town called Baler. That time, they were already mutinied by Filipino townsfolk and were trapped inside a chapel. This happened roughly six months after the implementation of a treaty that all the troops from Spain should be pulled out from the Philippines and the Spaniards were clueless and doubtful. “Los Ultimos de Filipinas” deals with paranoia, hypocrisy, lost love and patriotism.

2. Ciudad en Celo/City in Heat – Don’t be misled by its title. It isn’t an R18-rated film comparable to “Sex and Lucia” or “Y Tu Mama Tambien”. The film undertakes a couple of characters intertwined by a tragic death of a friend. For sure, you’ve seen at least French film of the same genre: non-climactic, talky and reflective. The film ends with an event that reunites the characters, sideswept by love, betrayal, moving on and enjoying life as it is.

3. Salvador – This one’s based on true events. Salvador is our version perhaps of Lean Alejandro, a student activitist who was gunned down during the Martial Law era. Salvador, on the other hand, was killed during the 70’s through a “garote” (their “silya elektrika”), the same machine that killed our Gomburza. The film documents his struggles partly with the underground movement, his fight for the rights and his face-off with death. Salvador became an icon, as he was the last person to be executed for a political crime (he accidentally shot a policeman during a bust for an underground movement).

4. El Proximo Oriente/The Near East – Very fast-paced and too mainstream, a pleaser for Filipino moviegoers who are not yet immersed to European cinema. The film tells a not-so-new story of two brothers and their beautiful Asian neighbor. The superior one, a family man, got the woman pregnant but the inferior one was the one who married her. The cultural and personality clashes are presented in a funny and lighthearted way.

5. El Aura/The Aura – If I remember it right, this film is not really a Spanish film but an Argentinian film in Spanish language. Among the lot, this film is surprisingly good for a heist/crime film. It tells a story of the protagonist who accidentally shot an old man in the forest while deer hunting and eventually took on the shoes left by the departed. What follows is a story similar to a Coen Brothers plot with less humor and speaking lines. This is a fete for the filmmaker as I, its audience, tried to decypher the lead character’s psyche. “Aura”, by the way, is medical term connected to epilepsy. It is described as “a distinctive feeling or some other warning sign when a seizure is coming” (www.epilepsy.com).

6. Secret Life of Words – This film won this year’s Audience Choice Award and the screening that I attended was just an encore. It tells a story of an Eastern European woman with impaired hearing who is forced to take a leave from work. The place is probably in England or Ireland. During vacation, she out of the blue volunteered to nurse a patient whose body was severely burned in an accident. The place was an oilrig in the middle of the sea. It was so remote that even the female lead character has to be transported through a helicopter. Given the location and an astonishing cinematography, I was instantly shipped to a port of melancholy (very effective indeed). The film is in English language and starring a big name fish Tim Robbins as one of the main characters (no wonder it got the audience’s nod). He played the patient who has his own ghosts to haunt. The two lead characters eventually tranced into a passage of healing and recovery. A risk that they took and had won over. In some awkward scenes, a narrator with a voice like a child reads somebody else’s thoughts (probably the woman’s). As the film ends, the voice bades farewell as she realizes that the woman has already a fulfilled life of her own.

SIDE TRIP: I didn’t win in the raffle where the prize is a three-in-one package of a night’s stay at Hotel Sofitel, dinner at Alba’s and a language course at Instituto. Better luck next year, amigo.
Posted by Manuel Pangaruy, Jr. at 8:26 AM No comments:

Campy! I am very biased when it comes to campy films and I got what I expected from this one. Of course, you have to leave your logic at home. Just bring in some style and a loud laugh. Swell fun.

Friends who might appreciate it: those who have watched some early Lito Lapid films.

Very book-ish but I love this film. It’s well made, actually, too well made that it might get some nods at the Oscars. It’s one of those films that tackle the intricate world of a female psyche. The screenplay is co-written by Michael Cunningham, the guy behind the highly successful and critically acclaimed “The Hours”. So expect something like a multi-layered characterization and storytelling.

Friends who might appreciate it: evening and morning persons alike.

If not for the film being predictable, “December Boys” is OK. For sure, I’ve seen something like that before. The finale scene, wherein two boys are about to drown and are later on apparitioned by an image of Virgin Mary, reminds me of a Jericho Rosales scene in “Tanging Yaman”. Feel good but predictable.

Friends who might appreciate it: Harry Potter (the movie) fans.

It's very rare that a film adaptation surpasses the achievements realized from a book. "Stardust", I can say, is one of them. But I have nothing against the fantasy novel authored by THE Neil Gaiman (my signed paperback copy of "American Gods" is a cherished possession). It's just that the book isn't that eventfully cinematic. Let me confess: when I was reading the book, I was imagining scenes as big as the ones that I've seen from the film. It would be better if you read the book first then watch the film and not the other way around. "Stardust", the film, is very entertaining, a perfect popcorn film to cap the weekend.

Friends who might appreciate it: starstruck (not the show) mortals.

In a nutshell, I love this film. It's a nice and brave attempt for the filmmakers to try a Pinoy black comedy made specially for the mainstream market. You can still smell slapstick comedy but that's easily forgiven. Not perfect yet for its genre but it's almost there. I like the idea on how film documents friendship as it transcends time, life and death. The four lead characters definitely deliver but kudos should be given to its director, Wenn Deramas, who did an unpretentious take on dark humor. At Pinoy na Pinoy ang pagkakagawa. All the ingredients are there: melodrama, oppression, family issues and more.

Another important documentary about the environment that is a must-see. Forget that it's narrated and produced by Leo Di Caprio but think of how we can help help ourselves. Kung meron mang drawback 'yung film, ito na siguro 'yung nag-uumapaw na kaalaman na nais ibahagi n'ung pelikula. It takes a broad and academic mind to absorb everything. Pang-Discovery Channel ang ilang treatment but it's worth watching just the same.

Friends who might appreciate it: those who have seen "An Inconvenient Truth".
Posted by Manuel Pangaruy, Jr. at 11:20 AM 1 comment: