Ely Buendia Once Performed His Greatest Hits and I Was There 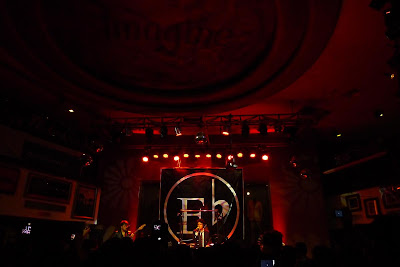 About two months ago, music enthusiasts flocked to Hardrock Café in Makati to witness Ely Buendia perform his greatest hits. The long queue was a bit intimidating. I was so sure that I didn’t know all of Ely’s songs, especially those outside the Eraserheads radar, and the crowd would just eat me wholly everytime I miss the lyrics.

Three weeks prior, I was in Montevideo when I heard about the gig. Ely was basically asking for some help from everyone to raise fund for A. Mabini Youth Center. It’s just a small show, meaning no Ticketworld reservation whatsoever. The how-to’s include emailing a certain Benjamin (who’s very nice based on the email exchange), waiting for a confirmation, depositing the payment and emailing the scanned copy of the transaction slip. Not in any bank but just Union Bank. In short, for my case, I had to ask some apartment folks a big favor to have the whole thing settled for me.

I remember being in the area at 7pm past. Part of the instructions from Benjamin was to redeem the ticket at the entrance by presenting the confirmation in PDF form. This one went well, if not sidetracked by the souvenir shirts and posters lying on the table. Chard (the Richard Bolisay) came (more of arrived because he’s The Richard Bolisay, there’s a noble difference) after 30 minutes. Since we were informed that the show will start as late as 10pm, we decided to proceed to Food Choices which is on the other side of Glorietta to have some dinner.

When done with the food and right before we bashed another film buff, I got a text from Trish that the gig has started already. It was only 9:15pm. We hurried back to Hardrock in denial that we’ve probably missed a song or two. I felt sorry for Chard and more importantly, I felt sorry for the fan in me. I mean, that was Ely Buendia singing his greatest hits in a venue that is not Saguijo, with a quartet-esque accompaniment and wearing a Hogwarts-like, preppy suit. How could I possibly abandon the very first part of the experience?

The moment I caught him sing his third song, “Maling Akala”, I knew I had forgiven myself. Hopefully, it was the same for Chard. As expected, the resto-bar was packed. We stayed close to the wall just opposite the mini-stage and tried our luck from there to fit in the crowd. That part was easy but the iPads used as a camera, that’s another story. “Huwag Mo Nang Itanong” was just right on cue.

Trish said that we missed “Alapaap” and “Ligaya”. The consolation is that at least I had the chance to catch the rest of the excellent playlist like “Magasin”, “With a Smile”, “Light Years” and “Fill Her” in a set-up that is far from his other small gigs. It was still intimate though. There was supposed to be a gap between two sets but Ely just sang (and played a guitar) a medley of his hits that included “Trip to Jerusalem” plus other songs that either I can’t remember or I didn’t know the title. “Tindahan ni Aling Nena” was given a fresh kick and it was a delight to hear such a masa song in a sosy place. The touches of harmonica for the “Pare Ko” number gave an equally entertaining nostalgia but it was “Huwag Kang Matakot” that reaffirmed why I braved the sucky ticketing procedures and why I easily moved on after missing the opening song. Ely, by the way, looked transparently happy all through out and that’s the most important thing.

He capped the short but sweet gig with “Tikman”. Though fans were still clamoring for more, we ended up heading to the bar area and redeemed our share of iced tea. Beer was an option but it was unusually busy that time so we only grabbed what was the easiest to grab. Trish and I caught up after the instant mosh pit was cleared. Chard introduced CJ de Silva to us and what followed was a brief photo opportunity. Trish was with Jeff whom I will always remember as a guy who has a tattoo of Ely Buendia’s signature on his left arm.

The rest of the pics here plus a video of Magasin here and With a Smile here.
Posted by Manuel Pangaruy, Jr. at 11:14 PM