There are supposedly three bestselling points in the film. First, the mistress as human factor. This is connection with the blockbuster success of films like “No Other Woman” and “A Secret Affair”. Secondly, the John Lloyd - Bea tandem. They have done a lot of romantic films under Star Cinema, mostly hits. And third, the Kapamilya Acting 101 as instructed by Olivia M. Lamasan. First point seemed forgotten in the end. Second point worked well as I expected. The third point, occasionally effective but high-pitched all through out. It still has that Star Cinema ending only slightly less irritating than the rest (with emphasis on "slightly").

Friends who might appreciate it: Those who think that John Lloyd Cruz was a better replacement of Derek Ramsay.

The saving grace of this crime drama is that it is fast paced and the take on corruption and poverty is not that in your face. It’s an outsider’s commentary and it doesn’t try hard to address anything. The focus is on human struggle, initially projected as a father in search for his daughter, as something universal and relatable. It could have been be better if the lead character doesn't cry a lot just to highlight the drama. Best part for me is the epilogue.

Friends who might appreciate it: Those who can prove that this is a better “Taken”.

Still feels like a short “Shake, Rattle and Roll” episode to me, with a conflict that can be easily resolved in, say, 30 to 45 minutes of running time. But there are a lot of good stuff out of its simplistic premise. Those violent and gross scenes are quite enjoyable. CGI is also well utilized, probably one of the best in recent Pinoy films. And there's discipline. It doesn't have the impact or even the statement of Ishmael Bernal's original but Rico Maria Ilarde is psyching its audience once again to dig deep on what's inside or what's underneath. Only more literal this time. Andi Eigenmann has proven that she’s really an Eigenmann. She has the sensuality and the flair needed for the role. Her screen presence with JM de Guzman worked really well.

Friends who might appreciate it: Those who are tired of having a Kris Aquino horror movie experience.

This is a glaring proof that we can make outstanding movies during the 50's. It's a triumph for those who restored it and have it handed over to our shores. Of course, it's not perfect, like the continuity issue with the fight scenes, etc., but it's never shallow. Manuel Conde's sense of filmmaking is just ahead of his time. It's beautifully shot given the budget limitation and the storytelling is intact. Filipino filmmakers (and audience) of this generation should start reconsidering.

Friends who might appreciate it: Every Filipino, film lover or not.

I've seen it all somewhere before (emo movie packed with emo songs) but it got me. It's a well acted, coming of age film with an agenda that is broader than what I expected. It's about family and friends, about high school and about first love pre-social media days. What sets it apart is that it provides a different dimension on facing the first day of highschool. Charlie (Logan Lerman) is seen here as having difficulty on meeting other people and blending in. This could be taken as an experience that is easily relatable since most of us had gone through it. Then the last 10 minutes just tweaked that notion into something more introspective.

Friends who might appreciate it: Parents of tweens or just tween at heart.

It’s an all-out formula movie with the main intention of providing "kilig" for the audience. Though it did not succeed, I had the impression that the writer did a good job in researching for the characters, given the limitation that Aga and Regine can no longer do a John Lloyd - Bea. The first part that introduces the pair in their respective worlds had me hooked. I'm not sure if it is the brisk editing or it is the effort in making it less Star Cinematic as possible. It doesn't have the customary montage while the theme song is playing and it has no irritating chase scene in the end. Bb. Joyce Bernal must be mellowing.

Friends who might appreciate it: I don’t mind recommending this to everybody with a thought that there’s hope in mainstream cinema.

Empty and trite, very Luc Besson. I hope there are no more sequels after this.

Friends who might appreciate it: A part of me is saying that Turkey remains a promising tourist destination after watching it so I recommend this to travel buffs.

It takes a while to get the hang of the found footage approach but past that, this film by David Ayer is a rare and enjoyable viewing experience. The police, for a change, are depicted as the way we expect them to be: trusted keepers of peace and security who are willing to risk their life on the streets. Stellar performances from Jake Gyllenhaal and Michael Peña deserve at least some nods from any major award giving body. Bonus: Must-see, cute wedding dance number from Jake and Anna Kendrick.

Friends who might appreciate it: Those who dig MC Hammer.

Effective in minimal quiet scenes that involve the nature, something that is expected from a Lasse Hallström film. The political satire part did not work for me but at least it showed that Kristin Scott Thomas can justify an Emma Thompson role. Emily Blunt can pull a romance film anytime but the film is not only about her or her screen partner Ewan McGregor. It's also about the British government, the sentiments in rich Arab countries and the faith in fishing.

Friends who might appreciate it: No idea. The eclectic mix of themes is very tricky.

What I find depressing is the idea that it is mainly banking on a gay character (by an openly gay actor) doing a caricature on male sexuality just to get his man back. In the first place, he should have just spilled the beans upfront and the ex-boyfriend's new relationship would be over. The film tried to introduce a kind of relationship that's rarely tackled in mainstream cinema but it's not very clear with its intent. If the reason behind Mike’s (Luis Manzano) relationship with Lester (Vice Ganda) is about the money, then we're down to the old, maligned treatment of the third sex. It is a lousy filmmaking as well. One glaring proof is that it should have gone a bit further in making the gay character look believable with his attempt on machismo. We've seen the likes of Mrs. Doubtfire, Tootsie and even the Ogie Alcasid-starrer Oh, My Girl! This one just presented the idea and stopped there.

Friends who might appreciate it: Those who have extra money.

This Ben Affleck-directed film is an insightful and well executed entertainment with a rousing last 15 minutes that kept me to the edge of my seat. In a very accessible way, it retells a story of CIA agent (Ben Affleck as well) who tries to rescue the employees of the American Embassy through a mock location shoot in Iran with the help of a Hollywood producer. Could be treated as a popcorn film but it also has some good stuff underneath. Production-wise, it's more ambitious than the director's first two films. It seals the notion that he has a rightful place in filmmaking, one of the rare instances that Hollywood is doing it right.

It's not an all-out, action-packed sci-fi film that I expected it to be but I enjoyed it being unpredictable. This time machine material lays down the piece one after another and brings the audience to a small scale but satisfying resolution. The first half introduced the concept in a brisk pace while the second half slowed down a bit to connect the bits of the puzzle. Joseph Gordon-Levitt did great, as well as (surprisingly) Bruce Willis.

Friends who might appreciate it: Eventhough I did like it, I think most of my friends will.

It's a buena mano for the green screen filmmaking in Pinoy cinema with a thin, segunda mano storyline. It seemed like it was stuck toying with the new technology, which ocassionally worked, and forgot to expound the aswang folklore. It showed that they are there, period, and the humans didn't even have some sort of disbelief. Was it even in the Philippines and in what period? It didn't help, too, that Dingdong Dantes was exerting too much effort for the bad boy role. He has to be reminded to downplay a bit.

Friends who might appreciate it: Not for me but this is an essential viewing for Filipinos.

This film that debuted at Sundance Film Festival last year worked fine as it is, except for the last story that contained too much CGI. There's actually nothing much but I appreciate the playfulness and the feel. It doesn't look like it's achieving a lot of things other than to inject small bits of fear. Some stories may be too short to savor but at least it is conscious enough in providing a plot given the limited time. Among the episodes (including the frame narrative), I enjoyed the very first one about guys who met a strange woman and the one that deals with videochat.

Friends who might appreciate it: I can easily single out some.

The boogie man's image is scary enough but the rest are the usual, manipulative cheap tricks. It isn’t hard to guess the twist and the appearance of the kids somewhat breaks the chill. Also, I'm not impressed with the acting (especially Ethan Hawke who does a Christopher de Leon here) and the resolution looked detached and questionable.

Friends who might appreciate it: Those who will enjoy V/H/S.
Posted by Manuel Pangaruy, Jr. at 1:45 AM No comments: 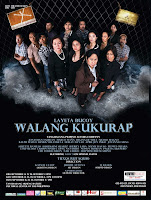