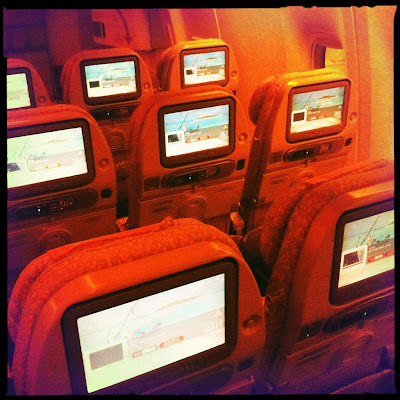 I remember five years ago that my direct flight to the Netherlands (again, walang personalan, trabaho lang ‘to) took 12 hours and 45 minutes. No complaint on my end. That means more movies to watch. And for airlines like KLM (with on-demand in-flight screening), it’s a joy to take long flights. Four years or so after, that was outdone when I was tasked to work onsite in a Uruguayan project. For the record, that’s a total of three flights, one from Manila to Dubai (eight hours) through Emirates, then Dubai to Sao Paolo (14 hours, 40 minutes), also through Emirates and a domestic flight-like trip from Sao Paolo to Montevideo (around three hours) through TAM/Pluna.

My personal challenge there is to watch many movies given with a limited travel time. As of press time, I could only finish four for a 14-hour trip (ideally and if I were 10 years younger, the count could be as healthy as six). I need to catch up with sleep. Time difference in Uruguay is like the total opposite. I need to eat. Economy or business, food in Emirates is just tempting. And for the previous trips where I got upgraded to business (pure luck), you can’t pass up the comfortable seat that’s easy to recline up to 180 degrees. Swell.

Anyway, here’s a quick rundown from the two flights I had. One from Sao Paolo to Dubai, the first four movies, and another from the recent Dubai to Sao Paolo with only two movies (thanks to the sleeping habit I gained from the recent Cinemalaya). This also marks another blog series for in-flight movies (which I am not sure if I can maintain it that long).

The Lightning Tree (Ryuichi Hiroki, 2010) A star-crossed love story between Narimichi, an official from a powerful clan, and Rai, a young girl living in the forest. At first look, it’s a period drama with bits and pieces of samurai action. The musical score is a mix of old-school theme and some contemporary pop. The effect is slightly weird but maybe the film is trying to reach the younger crowd. The film runs for 133 minutes and I probably paused this in the middle, slept and waited for the attendant to wake me up when lunch/dinner was ready.

Exit Through the Gift Shop (Bansky, 2010) This documentary has a disclaimer in the summary tab: “could be a hoax”. The film covers the rise of an artist through his search for the camera shy graffiti artist Bansky. Just to burst the curiosity bubble, the title suggests the thing you should do when chased by a police officer after completing a graffiti art (which others may call vandalism). There’s a lot of interesting elements mentioned in the film. There’s this sense of adventure in “executing” your artwork, a sense of danger, as if you’re making love to a married person. Then there’s the evolution of art without being too heavy-handed. I think I finished this in one go (with a help of probably some crackers and orange juice). If there’s one turn-off, it’s the part where Andre, for crying out loud, declares “I am an artist.”

Tamara Drewe (Stephen Frears, 2010) I am not sure if I have seen a lot of Stephen Frears movies but this one is his attempt to try out an Almodovar-ish tale with multiple characters and a dash of dry humor (could be a Woody Allen at some point). This keeps me up for a couple of minutes though there’s nothing much to root for. I’m sure I’ve seen better and more effective films than this.

Young Frankenstein (Mel Brooks, 1974) The thing with comedies in black and white is that they look serious with their wit. This is supposed to be a spoof of Mary Shelley’s literary work but compared to the gag shows we see of late, it doesn’t try very hard to be funny. Thanks to Gene Wilder’s presence and humor. The first sequence alone is a riot, with the grandson trying to avoid the misfit of the old Frankenstein demands his last name be pronounced as “Frankens-teen” instead. There are some corny one-liners like the “Where wolf?” part but it’s the 70’s and that’s forgivable. I had a ball watching this as I was racing against time. The plane was on its descent and the images froze from time to time due to the pilot’s necessary announcements.

The Dilemma (Ron Howard, 2010) Best thing that could be said about this film is the cast: Vince Vaughn, Kevin James, Jennifer Connelly, Winona Ryder, Channing Tatum and Queen Latifah. Ron Howard does something lighter this time but it was so light that I’m not sure if it’s even worthy of putting up into a film (a case of so-so take on a so-so material perhaps).

Fireflies in the Garden (Dennis Lee, 2008) Another great cast of A-listers: Julia Roberts, Willem Defoe, Ryan Reynolds, Emily Watson (!) and Carrie-Anne Moss (of Matrix’ Trinity fame). A predictable tale of a dysfunctional family whose redemption relies on revisiting the past no matter how painful. There are some great moments like the confrontation between the son and the father but there’s nothing new in general.

SIDE TRIP. Residue pics here from the last time we had a parrilla night with colleagues.
Posted by Manuel Pangaruy, Jr. at 4:38 PM No comments: