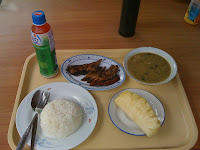 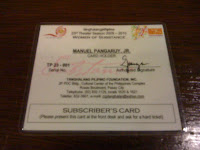 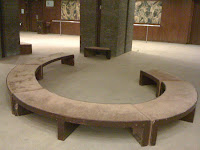 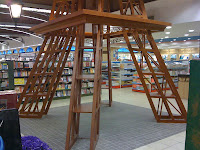 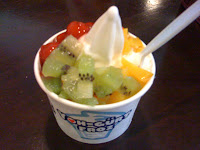 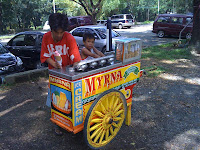 1. Manang’s. After two weeks or so of strict diet, I rewarded my self with pork liempo from Manang’s at The Ateneo. No, I did come from that school but some of my officemates were;

2. TP Subscription. Roughly three weeks ago, I finally got my TP subscription card. For the last season, I think, they did not create one and now it’s back. I am not sure if it has a purpose though other than as a souvenir;

3. Curve. CCP always amazes me and taking a picture of this curvy bench is just a proof. It’s very rare that the area is empty so I took the liberty to capture it;

4. Mamang Sorbetero. It was during one of those post-play-watching-at-Guerrero-Hall moments when you just feel like bumming around along the UP Diliman campus ground. After finishing a naked (read: healthy) sandwich, I tried a serving of dirty ice cream. Not to mention that it was hot during that noon and no, I did not come from that school either;

5. Fro-Yo. I was about to queue for Cine Europa at The Shang and I knew that it would require me to kill time for nearly two hours. This yummy frozen yogurt served both as healthy alternative (though pricey) and a morale booster;

6. Eiffel. This “landmark” was located at the National Bookstore branch at The Shang and it obviously caught my attention. Firstly, it’s the first famous international landmark I had seen. Secondly, the idea is plain genius for coming up something functional and cute;
Posted by Manuel Pangaruy, Jr. at 7:33 PM