Friends who might appreciate it: I don't know anybody.

Finally, a popcorn film that is both exciting and not pretentious. Medyo campy pa at times (I believe this is the strongest point of the film). Forget that Nic Cage didn’t get the Superman part.

Friends who might appreciate it: anybody, bata o matanda, may skull o wala.
Posted by Manuel Pangaruy, Jr. at 11:47 PM No comments:

This is Eddie Romero’s attempt to regain his pride as a National Artist for Film. It tells about, hmmm, different faces of love. Hahaha. Literally, the film has a handful of characters intertwined by a mysterious love letter. Merong pinagtagpo, merong muling dinalaw, merong kumawala, merong nagwakas. I can say that the storytelling is above average (naks, critic na critic). Naikwento ng filmmaker ang gustong ikwento. The problem with the film is the scope/feel. Pagkatapos kong mapanood, para lang akong nanood ng isang TV show. Ganun ang pakiramdam.

Friends who might appreciate it: those who miss watching GMA Telesine (every Thursday at 8pm during mid-90’s).

Friends who might appreciate it: only the Kapuso ones!
Posted by Manuel Pangaruy, Jr. at 5:42 AM No comments:

My first bad film of the year. Point 1: it’s not chilling. Point 2: acting is so-so (who’s taking Jim Carrey seriously, tell me) and Point 3: it’s directed by Joel Schumacher (in my book, he hasn’t done any impressive film yet). People in the moviehouse were only waiting for the twist. Poor Virginia Madsen. She has to endure crappy projects like this.

So old school. It’s like a watching a film done in the 80’s (the story-telling is straightforward, no CGI’s, no hip camera shots, etc.). But I am not saying that this is a bad film. It’s just that I don’t like it much. I find it very predictable, too. Well, it’s about a non-fictitious account of a Scottish young doctor with Uganda’s dictator, Idi Amin, during the 70’s. The film tells about their friendship (from Day One to Doomsday). Forest Whitaker might snag an Oscar here but I prefer Leo DiCaprio’s engaging acting in “Blood Diamond”. I find him OA at times, IMHO. If there are good scenes here, it must be the bonding scenes between the two lead characters. I can say that you won’t feel bad (naman) after watching this. But don’t bring a date.

Friends who might appreciate it: Allan (for the gorefest), Allan’s torpe friends, Academy Awards patrons and members of the underground film group that I belong to (I think, I should stop mentioning them).
Posted by Manuel Pangaruy, Jr. at 12:17 AM 1 comment:

The film reminds me of Neil Simon’s works like “They’re Playing Our Song” and even “Barefoot in the Park”. Some scenes are very stagey (minimal characters, lengthy and witty lines and mostly shot inside the apartment). The film’s only weakness is the ending. It’s very common, very, very familiar. Pero syempre, I can’t forget Hugh Grant’s band’s Pop Goes the Heart music video (the hip dance, the snapping, etc.). That one is worth watching.

Ang lalim! Hindi ko ma-dig. Hehehe. But let me try. The main plot is about a couple, Hugh Jackman and Rachel Weisz. May sakit si girl. The guy, a medicine person, is willing to do anything just to save his ladylove. In search for a medical breakthrough, the guy sometimes ignores the girl in the process (“this is for her”). The girl died physically and emotionally. Ang nagpalalim sa pelikula ay ‘yung visual inclusion ng isang lalake na kalbo (still, si Hugh Jackman) at ang tree of life/knowledge. I assume, spirit or heavenly creature s’ya. This is segued by the film’s prelude from Genesis’s Adam and Eve. I guess the director used this figuratively to suggest that in search of life/knowledge, there must be some kind of a sacrifice. What thickens the plot more is another story within the story. It’s called “The Fountain” written by the girl which she intends the guy to finish. It’s a period story about a Spanish warrior in search of the tree of life/knowledge. Basta, ang lalim. Hehehe. Though, hands down, it’s visually stunning.

Friends who might appreciate it: Darren Aronofsky fans (including me, I like his “Requiem for a Dream”), members of my underground film group (o-ha), Jim, Fer, Jae-Jay and Leah (simply because she’s a Hugh Jackman fan).
Posted by Manuel Pangaruy, Jr. at 9:53 PM 1 comment: 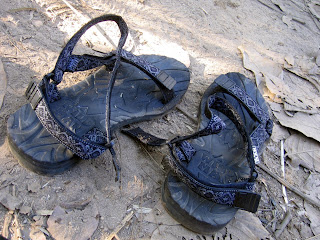 In line with my being 30 (read: doing stuff that I haven’t done before), I finally reached a mini-summit. Err, I meant a real mini-summit. Mountains, jungle, forest. Summit! Yeah. Summit, summit, summit!

Last Saturday, I woke at around 5am to meet Macy at Pililia corner JP Rizal. That’s where my cabmates and I meet to get a cab every office morning. But Macy and I were heading to Mc Donalds – Q Ave that time. We came in first. An hour (and a plate of Mc Franks) later, the rest of the chosen ones came in.

DISCLAIMER: First point: I’m trying to be lazy. Second point: I’m considering a scriptwriting technique where I won’t be giving everything. Clever is the word. And yes, I’m writing a script entitled “Pepeng Saksi”.

We reached the homebase of Jungle Environmental Survival Training (or simply, JEST-sy, pun intended) at around 12:30pm. Summer heat, it was. Next thing we knew, we were already trekking the forest with the help of two JEST-ers. It was a two-hour trek. I forgot how many rivers, mini-rivers and a German campsite we crossed but definitely bamboos were unforgettable (and will be unforgettable for at least a month, I think).

OK. At 4:30pm-ish, we have already set up our tents. Four lovely tents, a hammock city and some squatters. Then appetizer with TJ hotdogs. Then dinner with sisig and corned beef. Then Red Horse beer. Then vodka. Then red wine. Zzzz….

The next day, we reached the summit. After the summit, we died in the forest. Then we resurrected as bath-hungry criminals (pumped up with Magnolia twin popsicles and ice-cold mineral water).

Damn, I definitely left my soul in the jungle. I found my body eating roast beef and a portion of Angus ribeye steak at 3pm.
Posted by Manuel Pangaruy, Jr. at 2:44 AM No comments: 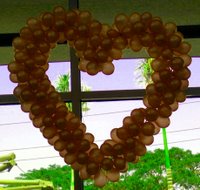 (First and foremost, NAKS! Hahaha. I actually wanna do a Tom Cruise and shout “I’m in love! I’m in love!”. But yes, I am in deep shit.)

NOT FAULTLESS – since love is a heart matter (as opposed to “mind” matter), it should be flawed. Maraming butas. Hindi kasi scientific. Hindi formulaic. Therefore, it’s free falling. Para kang nahuhulog sa Wild River, walang control from the railing. The thing is, you really don’t have to hold on to something (sorry, Rouge). If there’s a scene that best describes this, it should be the one in “Titanic” where Jack Dawson yelled at Rose “You jump, I jump!”.

UNCONDITIONAL – for me, the purest form of love is the unconditional one. It’s like banking in some investments without considering the returns. Or worse, hello, bankruptcy! Bagsak na kung bagsak ang stocks but that’s the reality. If your love is not returned, you die. Yeah, but soon you shall live. And do the chasing again and again. If you earn lots of chasings in the end and gain only one or two “finish lines”, consider the adage “life is a journey”. Quantity at quality, panalo ka pa rin.

A FORCE – hindi kasi nade-deform. It should materialize into something else (like a smile, a productive work, a friendly attitude, an orgasmic look, etc.). The best way to see it transform into something else is to consume it. Look around. Ang mga taong nasa paligid mo, lahat ‘yan ay bunga ng pag-ibig at repercussions nito. Either, may mapait or matamis na karanasan sa pag-ibig o anumang bagay na may kinalaman sa pag-ibig. Ganun kalupit ang love.
Posted by Manuel Pangaruy, Jr. at 12:21 AM 3 comments: