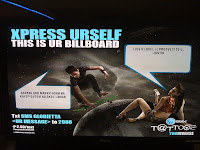 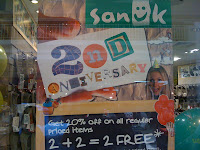 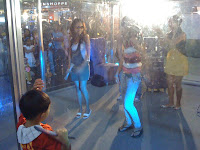 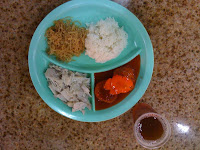 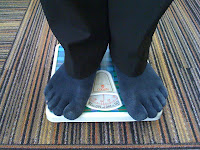 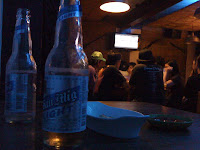 1. Message Board. Found this one in Glorietta, near Food Choices. It’s a real time message board from Globe wherein you can send an SMS or MMS and have it posted on the board. I tried sending the message “Guwapo ako. – Manny P” but did not bother to wait for it to be displayed. Just check out the message on the left and yes, the Manny there is me. Jeman was trying to assemble his flock in time for screening of “The Age of Stupid”;

2. 20% Off. I’ve been holding up my self from buying a pair of Sanuk for close to two years already. It ended when they offered a 20% discount on all the products. I’m just human and I love my new blue Mutiny;

3. Globe Tattoo’s Big Brother House. There’s this gimmick (also from Globe) wherein a pair called Tattoo Icons share a small transparent room right in the middle of the Market! Market!. What you can do is type in a task request for them on a PC (where a Globe Tattoo wireless broadband is attached) near the booth. Then the couple receives the request through their mobile phones. I submitted one entry asking them to do the PBB dance and it’s an epic fail. They did “Ocho-Ocho” instead with two other volunteers;

4. Two Beers. It’s one of those nights when it felt like a beer or two had to be finished to cap the night. All by myself, I just observed those groups in other tables singing some videoke pieces and enjoyed it. I left after an hour;

5. Da Who!. This one’s taken during the body fat check in the office and guess who is wearing this very functional pair of socks. Cute, eh? Just call him the Blue Man;

6. Fifty Pesos. I was surprised that I can get a P50-meal from a mall food court. It’s even cheaper than the carinderia food along our street! It’s got two dishes namely sweet and sour meatballs (it’s their bestseller and a must-try) and ginataang langka, rice, pansit bihon and a small serving of iced tea. The name of the stall, by the way, is Brod Pit;
Posted by Manuel Pangaruy, Jr. at 8:01 PM