Usual, formula film. Funny, yeah. It has karate, yeah. It’s in Paris, yeah. I wish to see this film in a bus on my way to Quezon. Good point: the great film director Roman Polanski made a cameo as a French police inspector. So ironic.

Avoid this film. Predictable, not fresh, not edgy. Good point: Jason Abalos made a remarkable turn as an actor in the Cinemalaya film “Endo”. He is part of this film.

Friends who might appreciate it: those who got OT pay.
Posted by Manuel Pangaruy, Jr. at 7:39 AM No comments: 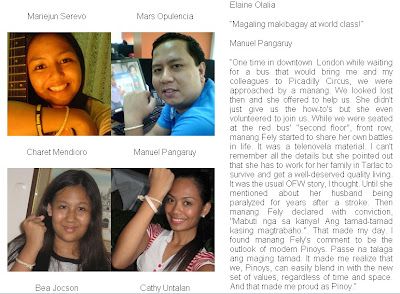 What can I say? Mixed emotions. Hahaha.

Just a background: Yabang Pinoy sent an email before encouraging its listers to share an instance wherein you felt proud as Pinoy. The email mentioned that it will be published on Manila Bulletin and a photo with me wearing the Yabang Pinoy band was required. I bought the papers on the specified date but my entry wasn't in there. Ayun...
Posted by Manuel Pangaruy, Jr. at 12:28 AM No comments:

A horror film from the director of “Roomboy” and writer of “Ouija”, Aloy Adlawan. It seems like this genre is becoming an initiation for indie filmmakers who are trying to find a niche in mainstream cinema. I am not sure if I like this film. The direction is OK, storyline is OK, some images are creepy and strange and the acting is not bad (Luis Alandy, Ricky Davao, Irma Adlawan, Chx Alcala, etc.). On top of these, the twist is awesome and well executed (complete with “planting”, etc.). It could be the dialog, too old school and reminiscent of the 80’s. Production design is not consistent, too. Some scenes are exceptional but some, amateurish.

Friends who might appreciate it: those who can’t decide what film to watch.

No pun intended but the movie has no weight (yeah, it has a plump lead character as a metaphor to racial discrimination) as compared to other film adaptation of a stage musical (i.e. “Chicago”, “Dreamgirls”, etc.) but it surely is 100% entertaining. I like the songs (very radio-friendly), the choreography and the “feel”. The direction and editing do not disappoint either. Most of the scenes are cinematic in terms of scope. Performances from the cast are also cool and above average.

Friends who might appreciate it: those who want to have swell fun.

This will definitely make it to the Razzies next year. “Evan Almighty” is one bad film that needs some spanking. I just cared to stay and wait for the plot’s resolution on “the flood”. It’s not worth it.

Friends who might appreciate it: those who haven’t seen a film for a long time.
Posted by Manuel Pangaruy, Jr. at 12:27 AM No comments:

Haaay, another day that tests my invincibility. I am not feeling well. I just want to rest at home and watch TV (complete with mom’s tender care and dad’s affection, aw).

I have sore throat. And it’s getting sorer. I already took the usual stuff from my survival kit: Amoxicilin and Solmux plus Bactidol gargle right before bedtime and gargle with iodized salt in the morning of the next day. I even tried the call center agents’ number one recommended lozenges, Orofar-L, but to no avail.

My first good mainstream, non-indie, Star Cinematic Pinoy film for 2007. Reasons: 1) fresh ang diskarte; 2) well-acted including Angelica Panganiban who looks off at first for the “adult” character; 3) subtle ang pagkakadirek at editing, hindi masyadong given; 4) Maryo J. Delos Reyes indeed is maturing as a film director (from “Laman” then “Magnifico” and “Naglalayag”); and 5) the audience likes it.

Friends who might appreciate it: those who wish to watch a mainstream movie that is not so mainstream.

This is an action film, a good one, for non-fans of action films. Others may react to “hand-held effect” of the cinematography (also used in “Batman Begins”) but for me, it adds realism to the film. No matter how heroic Jason Bourne (we have the same birth date, hehehe) is, it doesn’t feel phony or “cinematic” at all. It must be the direction and the reliable acting from Joan Allen and Matt Damon.

Friends who might appreciate it: those who are gravely avoiding “A Love Story”.
Posted by Manuel Pangaruy, Jr. at 1:08 AM No comments:

Notes from a Filmfest 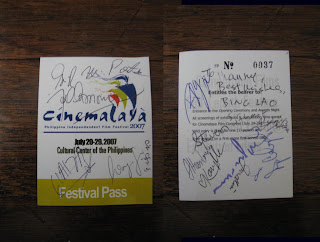 I really couldn’t get enough of this year’s Cinemalaya. It’s probably the best batch among the three installments. Here’s the fix, my recollection on competition and exhibition films in chronological order, all viewed a week or two ago:

TRIBU – this year’s Best Picture and Best Actor (ensemble). At first, I thought the film is just what it is: an ultra realistic storytelling of warring gangsters in Tondo. Mababaw sana s’ya except for the last two minutes of the film wherein a little boy is seen entering a room with a gun. The film opens with the line, “sa Tondo, bata ang bida” (pertaining to Sto. Nino or Infant Jesus). I suspect that the boy initiated the war just to get hold of the gun. Very “Ciudad de Dios”.

KADIN – Very Iranian (film). I can’t say that this film will salvage Adolf Alix’s artistry as a director but the film is average to above average. Tamang tama ang build up at maganda ang resolution sa huli. It helps that the film was entirely shot in Batanes.

LIGAW LIHAM – Right after watching the film, my initial comments were “well made but dragging”. And Karylle can’t add pogi points to the film. Her character is more of an Iza Calzado’s. It’s just well made. Period.

SEROKS – I was warned by some peeps to avoid this film (including one of the lead actors Neil Ryan Sese). The film must be bad, I thought. Unfortunately, it turned out the other way around. I enjoyed the film. Maybe because I was fascinated with multiple characters and their parallel lives. The plus point is the film’s noir look. It’s very “In the Mood for Love” and “Chungking Express”. I was informed by Ching Danseco, a cousin of a cousin and the film’s art director, that they were drunk when they did the film.

HANGGANG DITO NA LAMANG AT MARAMING SALAMAT – Among the films in exhibition, this film is the one I was most interested about. First, I love the stage version. When I saw PETA’s version with Joel Lamangan and Richard Quan, I already considered a film adaptation of the material. Napakaraming one-liners dito. Script pa lang, meaty na. Too bad that the film didn’t meet my expectations. Who cares about snail mails nowadays? I am not sure if we can update the film’s genre. I was rooting for a period film, set to a quaint town when texting and internet were not born yet. The direction is not helping either. Sinahugan pa ng ilang hubaran upang bumenta sa ibang market. The only saving grace is Nonie Buencamino’s acting. The film, by the way, was funded and made by some folks from Quezon Province (including the late Orlando Nadres). I saw some familiar faces inside the theater. A weekend after, the film got a second screening due to its popularity.

ENDO – It is this year’s version, in terms of impact, of my 2005 favorite “Sarong Banggi”. Sapol na sapol sa puso. May kirot at may haplos. Isa sa mga script na nagpapaisip sa akin na ‘wag nang magsulat dahil marami nang magagaling na manunulat. I love the metaphor between a short (work) contract and a relationship. Sana nare-renew, sana hindi. The other option is for the film to be preachy and spank the guys who can’t live without girlfriends but “Endo” chooses a path that is less traveled. Acting wise, Jason Abalos is a revelation and Ina Feleo, Laurice Guillen and Johnny Delgado’s daughter, is the next big thing in local film industry.

ROOMBOY – I missed this film when it was first shown in the first batch of Cinemalaya. Meryl Soriano won a Best Actress award here beating my personal favorite Jaclyn Jose (for “Sarong Banggi”, she won an Urian Best Actress though). I enjoyed the film. If there’s one drawback, it must be Polo Ravales’ acting. Hindi ko masakyan ang angst n’ya at kung napapakita n’ya ba talaga nang maayos o hindi.

TUKSO – The film is produced by a company called “Theater Arts”. To further describe the project, it was directed by Dennis Marasigan (Tanghalang Pilipino’s current frontman) and starred by (drum roll, please) Irma Adlawan, Shamaine Centenara, Nonie Buencamino, Soliman Cruz, Ping Medina and a bunch of actors from different theater groups. When I first saw the film “Sa North Diversion Road”, an adaptation from a stage play, I thought that the material was not film-able. After watching “Tukso”, I was starting to get the hang of it. Maybe there’s really a market for films that have a “stage play” feel (acting, lighting, monologues, etc.). The film, by the way, has a Rashomon-ish storytelling.
Posted by Manuel Pangaruy, Jr. at 1:11 AM No comments:

Friends who might appreciate it: those who want a good scare (and a good laugh).

Friends who might appreciate it: those who wish to watch a feel-good, honest-to-goodness film.
Posted by Manuel Pangaruy, Jr. at 1:08 AM No comments: 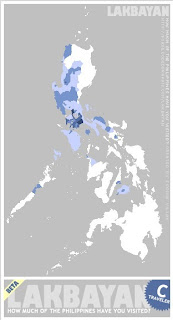 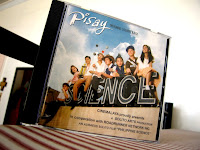 At last, an old school OST! Sana ganito na lahat ng mga OST ng pelikulang Noypi. It has musical scores plus the songs used in the movie. And the line-up of artists/contributors involved will not disappoint either: Squid-9 (Raymund Marasigan’s alter ego), Raymund Marisagan (hehehe), Buddy Zabala, McCoy Fundales of Orange and Lemons, Imago and Lourd de Veyra of Radioactive Sago Project. I bought the CD at the CCP Shop during the recently concluded Cinemalaya 2007. I am not sure if this will be available at your suking tindahan.
Posted by Manuel Pangaruy, Jr. at 12:27 AM No comments: