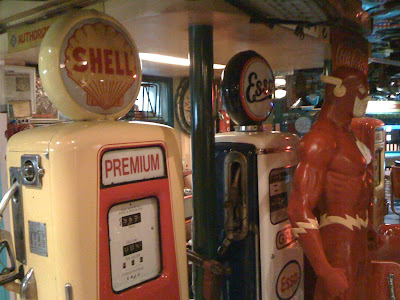 I, along with nine other officemates/friends, was supposed to try the ABS-CBN studio tour but typhoon Pepeng stopped us from doing so. Day started as early as 6:30am for me, preparing for a 9am rendezvous with Mel and Kristine at the office. I was about to join cabmates Joey and Jen on our way to The Fort when Mel (the organizer, hehehe) texted us that E-Live! was cancelled. Since Jen, Joey and I already had our sneakers on, we decided to meet at Jollibee - Reposo for breakfast. As we all best put it, "Sayang ang ligo".

Melvin followed suit after a few minutes for the same reason that he was already on his way to the meeting place. And before considering a parking space for the QQ, we were already off to one of my favorite breakfast hang-outs: Filling Station along Burgos St. in the heart Makati's red light district.

By the way, the 24-hour resto offers one of the best eggs benedict meals in the metro. It's a must-try though when we went there, they ran out of it. I tried their arroz a la cubana instead which is equally mouthwatering.
Posted by Manuel Pangaruy, Jr. at 10:48 PM