“I was in the same shop six years ago!”, said the girl beside me. I was having a non-alcoholic German beer called Marke Clausthaler on my flight to Frankfurt (then back to Amsterdam) when this Jodie Foster look-alike interrupted me while reading the broadsheet-sized give-away from the celebrity poet sandalmaker’s shop in Monasteraki. I uttered back with “oh, really?”. She’s from Vienna, she confessed to me.

I was actually daydreaming that time, admiring the other designs for the sandals. All of them are named after a person, ancient and not so ancient. They’ve got Plato, Cleopatra, Heracletus, Socrates, John Lennon, Jeremy Irons, Jackie O, Prince, Sophia Loren, etc. The sandalmaker, as the Top 10 Athens has mentioned, has crafted a dozen of sandals to celebrities who visited the shop (Gary Cooper, Barbra Streisand and the Beatles included). Then a recurring realization came: my ugly feet are humble enough for the “pogi” sandals (though I can feel that I have a celebrity spirit in me, always waiting to be of service). Just the same, I bought a pair, a Caesar, while Leah chose the classic Cleopatra over Maria Callas. On personal note, the other side of that leathered vanity, a not so expensive one, by the way, is a personalized service, reminiscent of the infamous Pinoy hospitality, courtesy of the poet – sandalmaker’s son named Pantellis Mellisinos (check out their website: www.melissinos-art.com ). Never in my life that I was pampered like Brad Pitt.

And that made my Greek weekend not so Greek at all.

That was, of course, on top of ruins after ruins: Acropolis, Agora, Kerameikos, Temple of Olympian Zeus, Hadrian’s Arch, Kallimarmaro Stadium, Roman Forum, Tower of the Winds, etc. Plus the voluntary food trip: moussaka, grilled octopus, calamari, home-made sausage and my favorite, “covered bread” (which is literally just covered by a table cloth to keep it warm).

For your indulgence, Athens pics here!

Leah and I didn’t just leave Athens without a godly experience. One hour and 20 minutes before the departure, we were still in the Metro line that connects the city center and Eleftherios Venizelos International Airport. Thirty minutes before, we were rushing from the train station to the check-in counter area (comparable to the distance between Ayala and Reposo along Buendia). I can almost feel the wings in my pair of Nike. Leah was just behind me running-pulling her hand-carry bag (the standard one, take that!). I did not attempt to look back because I might turn into salt (is that Greek myth or what?). Anyway, 20 minutes before the departure, we were still looking for the Lufthansa counter which was not easy to find. We were panting when we finally reached counter 145 (in the left-most part of the terminal). Leah hurriedly asked the lady behind the bar if we can still rush to the gate for boarding. Then the lady said, “Of course. The flight is delayed for 45 minutes”. Now I understand the corniness behind the big Athens tourism billboard which greeted us when we arrived. In glaring font and with pride, it says “Welcome to Greece. Discover a new myth. Yours.”.
Posted by Manuel Pangaruy, Jr. at 11:38 AM 7 comments: 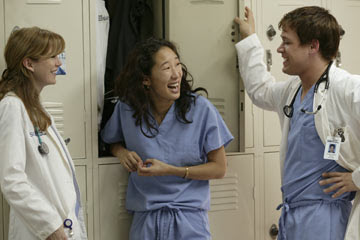 I just had two servings of Grey’s Anatomy reruns. The first was a season finale and the other, Season Two opener. I coped without watching Season One’s episodes seven and eight but I’m still at it. I’m hooked.

When it was first primetimed in a Dutch channel (with “English” shows) every Tuesday (back-to-back with another ABC show, “Desperate Housewives”), Leah called that weekday “TV Day”. Before, I just watched DH and turned off the tele for GA. I sometimes find my self lost with the characters and the twists. Maybe because I missed to watch the pilot episode. It happened to me before while watching OC. All the while, I did not know that one of the main characters is adopted.

Now, the Dutch channel is airing two GA reruns every Sunday. I have the reason now to appreciate the show. I am not really a medical show fan. It must be my being hematophobic or just too much movies, perhaps. I skipped “ER” and “Chicago Hope” during the 90’s. I suppose that those shows cater more on documenting the patient’s melodramatic lives and the doctors are just playing cool. GA is not about that. It’s about friendship. And their brand of “friendship” is about care.

GA’s central character is Meredith Grey, a practicing surgeon. The other leads are her four friends (and colleagues) namely Cristina (I love Sandra Oh!), George, the character played by Catherine Heigl and the assholic guy named Alex. The show is about their messy lives and how they try to untangle it with a little help of friendship. The fact that the show suggests that friendship exists in the workplace is a reason enough to get addicted with GA. Sometimes it’s elusive. Sometimes you’re reminded that this planet is as cutthroat and dog-eat-dog as Philippine politics. GA is a relief. Life is sweet. As Coldplay best puts it “we live in a beautiful world”. Yes, we do. Yes, we do.
Posted by Manuel Pangaruy, Jr. at 5:38 AM 3 comments:

What to Do in Barcelona When You’re Dead 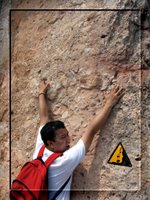 If you’re not thinking about your life, meaning, you don’t care if you still have extra bucks to get your ass back from where you came from or eating is not an option, here are the things to consider when going to Barcelona:

To help you figure out what I’m trash-talking about, please check out some pictures here.

I’ve received nice reviews of the album. I was inspired, true. Confession time: Barcelona greeted me with a rerun of Rosalinda, undubbed, in the hotel room.
Posted by Manuel Pangaruy, Jr. at 5:35 AM No comments: