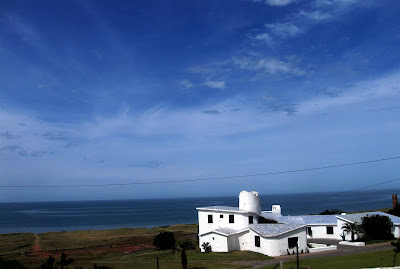 Most of the people who have gone through Uruguay claim that there are only three major tourist spots in the country that are worth visiting (and I hope to contest that someday): Montevideo, Colonia and Punta del Este.

I understand Montevideo for being on the list as it is the capital city where the presidential, senate and congress houses are seated. It also brags of its own huge ciudad vieja where some historic buildings are found plus the beautiful sunset in the rambla and a nice gastronomic haven in Mercado del Puerto. Colonia, on the other hand, has a small well maintained ciudad vieja with a lighthouse strategically erected to overlook Rio de la Plata (where a tiny Buenos Aires can be seen on a clear day). The oldest church in the country is also there and sunset is best enjoyed in the yacht port. As for Punta del Este, below is my share:

Just like any other out-of-town trips from Montevideo, we took a COT bus from Tres Cruces Shopping/Bus Station (as its slogan suggests, is “where the country meets”). There are other options, of course, but I remember the guys in The Amazing Race – Season 5 taking the same bus company. The direct bus, one-way, costs us UYU 158 (or PHP 340) and we bought it two days prior to the trip. If I remember it correctly, there are two more COT busses going to Punta del Este for the 9:15am trip. 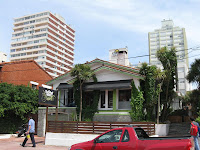 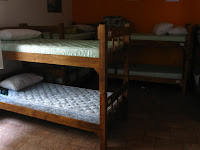 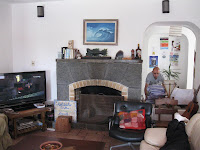 Weekend trip pictures here and the rest of the pictures of the hostel here.

Based on the atmosphere in Punta del Este, it seems like a hotel reservation is needed at least three days prior to the trip. It’s not peak season yet when we went there last November 27 – 28 weekend but I imagine the summer days in February to be so jam-packed with visitors. Out of the three options we had, we picked Tas D’Viaje Hostel probably because of location and availability of rooms with 10 – 12 dorm-like beds.

It’s strategically located roughly four blocks away from the central bus station in Punta del Este. From the same bus station, La Mano can be seen already. So we took a really quick stop there and walked to the hostel which is just along 24 St. (one of the main streets). 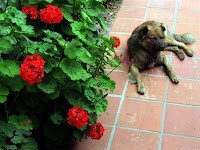 The hostel is, first and foremost, doesn’t remind us of the movie “Hostel”. Beside it is actually a sex shop, a notion that the hostel is probably a fun place. There’s a small gate on the right with a visible sign “RING” that points to a doorbell. Don’t try banging the gate as the guard dog Sargento might confront you. The lobby seems like a nest for surfers or backpackers or both. There’s a cozy couch, a big LCD TV and some magazines. The porteros are very friendly, to a point that you’ll mistake them for stranded backpackers. Kitchen is just beside the lobby where you can use the cooking ware and utensils if you wish to cook (breakfast is free, by the way). A few meters from the hostel is a supermarket (with a bakeshop inside it) that opens as early 9am and closes at midnight. 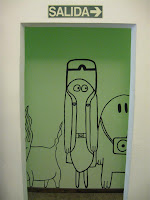 Going to the rooms will have you glance and adore the artwork almost everywhere. The walls are brightly painted and very warm to the eyes. We were only 10 but the room we got is good for 12. The 11th bunk bed belongs to an Aussie guy who stood our snoring at night and the occasional noise. Just like in other hostels, the toilet is common to all visitors. For the guys, it has two small rooms for toilet bowls and four shower rooms separated by a plastic glass divider and covered by shower curtains. True to its artsy feel, the toilet itself is charming. They have towels for rent at UYU 60 (PHP 129) each. Locker is for free so long as you bring your own small locks.

Rate is at UYU 358 (PHP 771) per person/day. I’ve only tried three hostels (one in Edinburgh and two in London) in my whole travel life and this one is definitely the best. 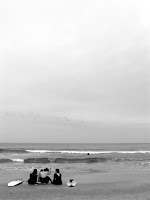 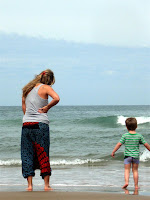 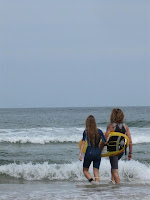 More snapshots of the beach here.

At past 12 noon, after settling in, we found ourselves strolling along the streets of Punta del Este hunting for food. We reached the Western side of the area facing Rio de la Plata and started browsing through a couple of restaurants there. We ended up in a make-your-own chiviteria which wasn’t so bad.

From there, we had a few blocks’ worth of walking, heading back to the Eastern side which is facing the Atlantic Ocean (so it’s river on the left and ocean on the right). It all began with a barefoot walk along the beach sand but we ended up setting up our mats and having a swim. Not all 10 of us swam (including me). It must be the temperature. It’s very cold. The rest braved it along with the giant waves that were enjoyed, too, by the surfers young and old.

The beach front we were at is called Playa de los Ingleses. It’s a stretch of fine but not so white sand. A Quicksilver event for surfers was being held that time but we were far from where the real action was (the announcements were in Spanish, anyway). Family and friends also gathered there enjoying the warm weather, having a stroll, a sunbath, a football game or just plain bumming around. 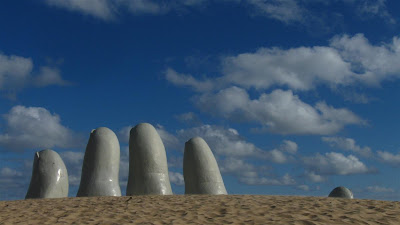 In the late afternoon, while the guys were probably playing some card games, I sneaked out and took a solo stroll near La Mano area. It was probably close to 6pm and the place was not occasionally busy. I managed to capture some pictures of it without anyone covering the view.

La Mano, by the way, is a sculpture by Mario Irrarazabal using mamposteria. It’s a giant structure of five fingers that represent a hand with the palm up, the last image that you can see from a drowning person. You have to be a bit far from the artwork to get the picture (otherwise, it looks like a polished Stonehenge piece up close). It’s put up in an elevated part of the sand in the playa and people in cars stop by from time to time just to take pictures. Just don’t ask me why the hell it is there and let’s just take it as a safety precaution.

The next day, we went to the highlight of the weekend trip (well, at least for me). The hotel/museum is used as the first pit stop in The Amazing Race – Season 5 (same season where the racers visited the Philippines). We went there by public transportation, particularly by COT bus. It’s the same bus that leaves for Montevideo and departure schedule is at every hour (return fares at UYU 68 or PHP 147). Taxis offer a back-and-forth transfer for UYU 1,000 (can accommodate four so it’s UYU 250 or PHP 538 each) and the taxi driver that I talked with mentioned that he’s willing to wait for 30 minutes (otherwise, we can just contact him for pick-up).

From the stop where the bus dropped us (the trip took roughly 15 to 20 minutes), we had to walk for two kilometers. There’s a good view of the city and other beach fronts along the way so the walk wasn’t boring at all. On our part for example, we stopped every ten minutes just to take pictures. I didn’t time the whole walking part but it probably took us 20 minutes to reach our destination. 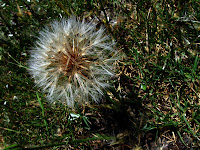 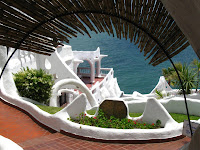 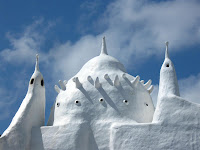 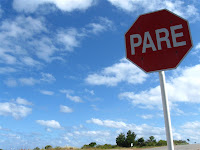 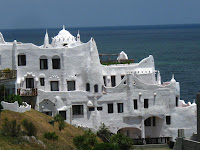 Casapueblo is Carlos Páez Vilaró’s living sculpture that resembles those iconic white houses in Santorini, Greece with some hint of Gaudi’s signature domes. It’s primarily a hotel (an expensive one, I suppose) but it also has a museum with coffee shop. They charge UYU 120 (PHP 258) for the entrance but I think taking pictures from the outside should be fine. It is built in the remote Punta Ballena and romantically located on a hill facing the Atlantic Ocean. Beneath the grandeur of the place is a story about Vilaró’s son who is one of the survivors of the Uruguayan Air Force Flight 571 that crashed in the Andes (the basis of Frank Marshall’s “Alive” in 1993).

The museum is not really a big one but it houses Vilaró’s extensive collection of paintings and sculptures. In the topmost floor is a specially designed (probably by Vilaró himself) audio-visual room where a short film about the man’s inspirations and life is played. The coffee shop leads to a veranda facing the Atlantic where sunset is best experienced.

We capped the weekend with a short trip to La Mano and a quick dinner at La Pasiva. The bus going back to Montevideo left at 8:15pm. It was also sunset time. I was probably smiling when I slept during our trip back to reality.

P.S. If we look tired on the pictures, blame the Friday night party that we attended to. Evidences here.
Posted by Manuel Pangaruy, Jr. at 8:44 PM No comments: