The Best KTV Bar in Makati! 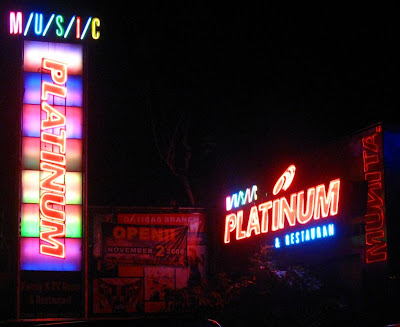 We found this little known videoke haven out of desperation to book in any of the three KTV bars near Jupiter St. in Makati. It was already a Thursday and the planned event was going to be held the next day. Centerstage was fully booked and so was Music 21. Top Grill doesn’t accept reservations for a Friday stint. And the always top of the list Red Box in Greenbelt 3 was not considered that time. Then an angel shared a link to a blog about a girl who just partied big time in the best KTV bar in Makati.

Name of the place is Music Platinum Family KTV Room and Restaurant (or simply Platinum KTV) and it’s located at # 47 Polaris St., just near the corner of Jupiter St. and Makati Ave. (where Mang Inasal Restaurant can be found). Mind the inclusion of the word “Family” for you to dismiss any hanky-panky ideas that might come up. If you’re coming from EDSA, along Jupiter St., just turn right and thread along Polaris St. The place can be reached in less than a minute and it’s on the right. Its big neon signs can keep you guided. In front, a serviceable parking space manned by security guards is waiting.

The room we got for 15 people costs P600 per hour (plus 12% tax, I guess). That’s cheap enough compared to the other three KTV bars mentioned earlier. It’s not consumable but you can comfortably squeeze in two or three extra peeps without having additional fee. A bucket of beer (with six bottles) costs P400. Given that rate, just imagine the price range for the rest of the food and other beverages. 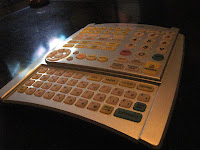 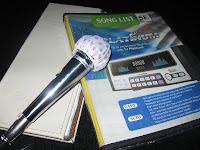 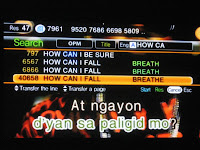 Inside the room are a sizeable flat screen TV, satellite speakers, songbooks, a unique remote control (where you can find the artist or song title without distracting the singer) and two microphones covered with a showercap-like material (talking about hygiene!). The discoball in the ceiling completes the party mode. Songs are pretty much up-to-date, from 2NE1’s “I Don’t Care” to YM’s “Mas Mahal na Kita Ngayon”. Just note though that some entries are apparently MP3’s and it would require you to sing the piece sans the lyrics guide.

So next time you’re looking for a videoke place, I recommend Platinum for its affordability, good service and nice interior. Feel free to inquire or reserve at +63-2-890-30-60. They are open from 4pm to 4:30am.
Posted by Manuel Pangaruy, Jr. at 8:10 PM

This is such a great resource that you are providing and you give it away for free. I enjoy seeing websites that understand the value of providing a prime resource for free. I truly loved reading your post. Thanks!

thank you for sharing. i had been looking around makati for a nice and cheap ktv for the last 4 days already and it's nice that someone shared something like this for free hehehe... keep it up!!!

I don't know about the rate. Maybe they changed a bit, not sure. Thanks for the comment, anyway. :D

Thanks for info. This is our venue for tonight's reunion with former officemates in Planning Office of Makati City.

P600 per hour for 15 people is cheap considering that it is located in Makati. Does this include the use of the videoke machine? But the price of beer is more expensive than the normal rate I think.

I'm not sure if they have the same rate now but the price includes everything except for the food and drinks. I agree with you on the price of the beer. :)