Isang magandang pagtanggap ito ng pagbabalik ko sa Eiga Sai (naks!). Hindi sa iniwanan ko ‘yung festival, wala lang talagang time. This year’s edition of Japanese film fest showcases their best of contemporary teen flicks. And I love “Kamikaze Girls”. I was reminded of “Trainspotting” with the art direction but it’s totally different. Nago-overlap ang symbols and metaphors at andaming gustong sabihin n’ung film. But if you’re too lazy to digest everything, that’s fine. You can just view the film as a film about friendship and being our own selves. A must-see.

Friends who might appreciate it: film buffs and J-pop fans.

I don’t know about this film. Maybe I was expecting something like “Pay It Forward”. So-so but it’s not that annoying. OK, I’m biased but the Kapuso artists who were Kapamilya before shine the brightest in the film. Marvin Agustin even made an effort to try method acting, which was complemented by the support from Jaclyn Jose, Nash Aguas and Dominic Ochoa. Their episode, “Daddy’s Angel”, is directed by debuting director Dingdong Dantes (yeah, the actor). There’s this really unforgettable scene from the same episode. Habang inuubo si Marvin, dumura s’ya ng dugo. Ang kanyang alagang puting pusa ay lumapit sa sahig at dinilaan ito. Whoa!

Friends who might appreciate it: those who are too happy.
Posted by Manuel Pangaruy, Jr. at 1:07 AM No comments:

SCENE 1: Friday night. Went to Market! Market! to meet my celebrity friends/band. Hahaha. Da who! It’s been two years since I first met them in a mall (Glorietta). This time it is all about friendship. I had a nice heart-to-heart conversation with one of the band members while the rest were having a facial treatment at Mendez.

SCENE 3: Saturday morning. I was reading PDI while my roommate (expect a blog entry entitled “The Ultimate Roommate Checklist”) was playing Sudoku for the first time. He gave up. He said it has a Level 4 difficulty. Forgiven and understood.

SCENE 4: Double-deck shopping in Paco, Manila. We took a jeepney ride from JP Rizal to Pedro Gil. We just asked manong driver to kick us at Paco’s Furnitureland (there’s no such mall named after that, I just coined the word for that portion in Pedro Gil where you can buy furniture for a low, low price). We bought the bed, black-colored, (“top floor” is 36-inch wide while “ground floor” is 48) for P4500 at TS Trading (no relations to the author of “The Lion, the Witch and the Wardrobe”). That’s a good deal inclusive of delivery and an ordinary cushion (I had no choice between a floral overload and Winnie, the Pooh in bloody red pattern). It should be P5k flat if we needed a pair of cushion and P1k more if we got Uratex (the options are ordinary or Uratex – there’s a monopoly over there!).

SCENE 5: A sweet and short visit at Mizuno shop in Magallanes. The weekend malling was cut off really short (last stop supposedly was bootleg shopping at Makati Cinema Square) because we got a text message that the double-deck was ready for delivery.

SCENE 7: Robinson’s Galleria to meet my officemates to watch a local stage adaptation of Disney’s “High School Musical”. I had a blast. The kids were cool and brimming with talent. They’re like boiling water.

SCENE 9: Sunday morning, room alone. Got up early to clean the room. I moved the mini-shelf containing the books, CD’s and magazines to a more OC-friendly corner. I love my room.

SCENE 12: There was a gentle commotion (naks!) in front of the ticket booth. There was a respectable-looking lady complaining to the cinema manager. This was all about Shang’s ticket distribution. As you see, the Eiga Sai tickets are for free but you have to queue two hours before the screening to get it. That’s fine but there’s a slight problem. The screenings were at 2pm, 5pm and 8pm. If you’re eager to watch two consecutive films, you have to leave the cinema in the middle of your first film to line up for the second film’s ticket. My favorite line for that day came from the lady. She said in a very passionate manner, “Kung buhay pa si Lino Brocka, malamang binato na kayo!”.

SCENE 13: I missed to get a ticket for Eiga Sai’s “Hotel Hibiscus” at 5pm. I watched “Angels” instead in Glorietta.

SCENE 15: Right before midnight, my landlady, Nadine, her son, Khyke, and I went to a nearby 24-hour internet shop. Khyke had to do a research on diptonggo and klaster.
Posted by Manuel Pangaruy, Jr. at 1:03 AM 2 comments:

Close to a B movie. The script is not fantastic, the filmmaking is too old school and the CGI is not consistent (the dance sequence with Mr. Fantastic has a poor CGI while the one when Galactus is leaving the planet is awesome). If this one’s shown in the early 90’s, then that’s a different story.

Friends who might appreciate it: only those who enjoyed the first one.

First two-thumbs-up Pinoy film for 2007. Definitely a must-watch. This film should be given an A rating from Cinema Evaluation Board. I’m not a fan of Binoe (and after watching the film, I remain a non-fan) but this is an acting milestone for the Bad Boy of Philippine Cinema. Kailangan lang i-tone down ‘yung mga eksena n’ya na medyo pathetic dapat s’ya but he’s almost there. And the cinematography! Wala akong masabi. If I’m not mistaken, the film’s cinematographer is a “suki” of some Rivermaya music videos as director. “Naamoy” ko rin ang dumi ng mga apartments dahil sa mahusay na production design. Ato Bautista is definitely a filmmaker to watch out for. Hindi ako na-alienate sa pagkakadirek n’ya: not too artsy or too personal. I would also like to acknowledge Elmo Redrico’s “presence” (no pun intended) in the film. He played one of Binoe’s tenants. Sumalangit nawa ang kaluluwa n’ya. He died months ago and “Blackout” is his last film. Isa s’yang tunay na artist na ayon sa mga kuwento ay tumatanggap ng styling gel bilang talent fee. What “Blackout” did to Elmo is to occasionally remind us that an artist is as good as his last performance.

Friends who might appreciate it: those who are losing faith in Philippine cinema.
Posted by Manuel Pangaruy, Jr. at 12:03 AM No comments: 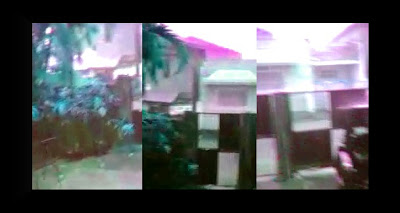 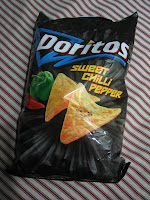 If there’s a bag of chips that will make you forget your name, it must be the Sweet Chilli Pepper flavor of Doritos. I am not sure if this is exclusive to Schengen area but I get my fix for this from the Netherlands (through my hardworking, goodlooking and god-like officemates assigned in Utrecht). In UK, the flavor’s called “Chilli Heatwave”.
Posted by Manuel Pangaruy, Jr. at 1:09 AM No comments:

Pwede. I am fan of “Diabolique” (the remake will do for me) and I was expecting a plot similar to that. But lo and behold, this one’s different. Ikinuwento ng pelikula ang isang mag-asawa kung saan ang babae ay naiwan sa isang liblib na lugar, walang kuryente, walang text, walang katsismisan. One day, she met another woman. Nagkaroon na s’ya ng katsismisan pero naging kumplikado n’ung bumalik ang asawa. I thought it was that predictable (Joel Lamangan made a similar material in the film “Sidhi”). Pero hindi pala. There’s a twist worthy of a bucket of popcorn. Pwede. The only drawback is the acting. Paging Assunta de Rossi, Ara Mina and Jay Manalo!

Friends who might appreciate it: those who believe that “If it’s from Seiko, it must be good”.

Friends who might appreciate it: those whose middle name is “Cool”.
Posted by Manuel Pangaruy, Jr. at 1:07 AM No comments:

I can describe the film while watching it as reading a nice adventure book. It’s a popcorn film, yes, but very intelligently done. Hindi nakakabobo. And it has Johnny Depp (probably this generation’s Marlon Brando)! For me, this sequel is the best among the three Pirates film. A must-see (naks, hahaha).

Friends who might appreciate it: all my savvy friends.

Yeah, it’s formula. The thing is, it’s not sugarcoated. It even has a dark undertone, confirmed by the suicidal character played by Piolo Pascual. Halos buong movie, suicidal s’ya. ‘Yung plot about raising money is for an airplane to be repaired to be later on used as deathbed. For me, that’s new for a production from Star Cinema (or Regal or GMA Films or….). The film’s not bad but definitely not good enough. Pwede na.

Friends who might appreciate it: Eugene Domingo fans.
Posted by Manuel Pangaruy, Jr. at 1:01 AM No comments: