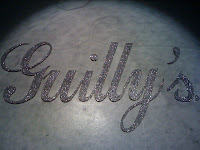 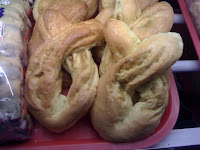 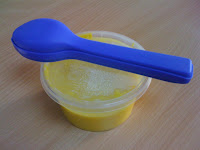 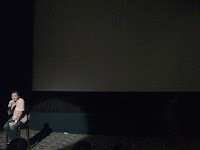 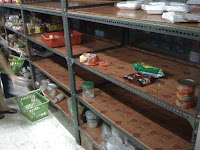 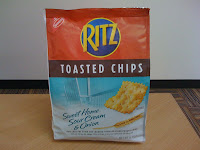 1. Sabado Night. One of the most difficult things to do is to say no to a drinking bout even if you’re undergoing a strict diet. I gave in. Thanks to this little hang-out near ABS-CBN. I felt too old afterwards;

2. Cory Bread. Found this bread at Julie’s Bakeshop on my way home from Market! Market! No, I didn’t buy one. I was just amazed with the idea;

3. Pumpkin Soup. This yummy serving costs P25 only from Betsy’s, one of the lunch vendors who visits our office everyday;

4. Toasted Chips. Flavored Sweet Home Sour Cream and Onion, this one just joined my bandwagon of favorite snacks. Miss Jenny normally buys one for me from S&R and each bag costs P145;

5. Panic Buying. Taken during the eve of typhoon Pepeng’s wrath. The shelf used to contain bread and is always full. People might be really traumatized by typhoon Ondoy;

6. Q&A. Part of the recently concluded Spanish Film Festival at Greenbelt 3 was a film dialog with Max Lemcke. This was done after the screening of his film “Casual Day”, my third favorite film from the line-up;
Posted by Manuel Pangaruy, Jr. at 1:16 PM