Notes from a Film Awards Night 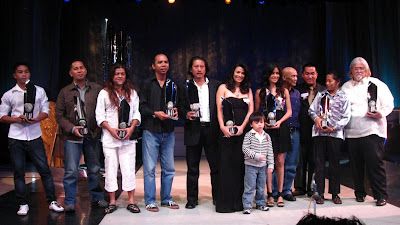 I skipped the Gary Valenciano – Martin Nievera concert because of the 32nd Gawad Urian held at CCP’s Tanghalang Aurelio Tolentino last September 19. You see, it’s my first time to attend a Manunuri gathering (and a second time for an awards night). A friend who happens to be Peque Gallaga’s biggest fan offered an invite and who am I to say no. Here are some notes:

1. The event looked like an open-to-the-public event after all. While waiting for my film buff friend, I started joining the queue. A CCP staff distributed some tickets that served as control number. We were just asked to register and that’s it;

3. Gawad Urian used to boast of big and unique production numbers in between giving out awards. I’m not sure if it has something to do with global economic crisis but this year’s event only had plain and simple numbers from greats like Bayang Barrios, Cooky Chua and stage actor Onyl Torres. The opening act that has three performers from Alunalun Dance Circle doing a Japanese-like interpretative dances through a Yoyoy Villame medley;

4. Peque Gallaga’s speech was definitely one of the beautiful speeches I’ve heard from a local awards night. He mentioned about Francis Ford Coppola’s observation that the next Michaelangelo of films would be a fat girl from Kansas and later on contested that it’s gonna be a fat girl from Bacolod or Pampanga or Davao City. Quoting Peque, “Shooting a film with a camera is like shooting with a gun.”;

5. Butch Francisco made some booboos by mentioning that Akihiro Sato’s absence might be due to Survivor – Palau (instead of Celebrity Duets). The confusion became clear when he called on the presentor for the next award who happened to be JC Tiuseco. When Boots Anson-Roa noticed that most winners were not around, she thought that they must be abroad screening their films. Butch downplayed it by saying, “O juma-junket lang sila.”;

6. The invite I got from my friend is now being kept. Back of it has three autographs: Julian Duque (who also deserved the Best Actor award for “Boses”), Ronnie Lazaro and Pepe Diokno (who made a comment that I should ask the Urian winners to have it signed instead of him); and

7. Most of the awards looks evenly distributed to deserving films like “Serbis”, “Yanggaw”, “Jay” and “Hunghong sa Yuta”. Too bad that another great indie film entitled “Huling Pasada” didn’t make it to the cut except for nominations for Best Editing, Best Cinematography, Best Actor for Neil Ryan Sese (who can’t attend the event due to DUP’s “Amphitryon”) and Best Supporting Actress for Agot Isidro. Here’s hoping that next year’s harvest is equally substantial and deserving.
Posted by Manuel Pangaruy, Jr. at 3:43 PM