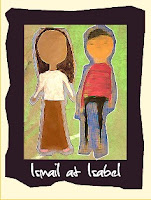 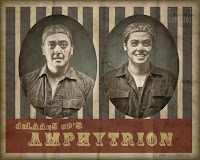 First and third photos are taken by Jojit Lorenzo for his Photo Kitchen while picture in the middle is reposted from the PETA website.

Tanghalang Pilipino’s “Madonna Brava ng Mindanao” (by Don Pagusara and directed by Nestor Horfilla) accomplished a challenging task by adapting Bertolt Brecht’s “Mother Courage” using Filipino flavors and sensitivity. It’s not really a direct translation of the material but a “localization” of it that goes through different (and tiring) generations of war in Mindanao. PETA’s “Ismail at Isabel”, written by Palanca winner Rody Vera and directed by resident director Maribel Legarda, touches the same base but on a different light. It tells a tale of two Muslim – Christian children, their friendship and the destiny that awaits them. Dulaang UP’s “Amphitryon”, on the other hand, treads a totally different path. It’s a Filipino translation by Jerry Respeto of a Heinrich Von Kleist’s materpiece. On the helm is the great Jose Estrella. It humanizes a Greek mythology on godly intervention then borders to a comic tale of mistaken identities served in a Shakespeare-like manner.

Shamaine Centenera as the lead Madonna Brava is a delight by itself. Her brisk Muslim accent was sustained all through out the performance. Same stability goes with her grief of losing all her children in the line of conflicts in Mindanao. Popong Landero, a recent Urian winner for the film “Hunghong sa Yuta, provided music for TP’s 23rd season’s second production. The semi-musical part came in as a surprise but it’s definitely a breather for a material so grave and heartbreaking. Some songs stood out and can be contested as one of the better original musical masterpieces set in a local stage. The main set used as mini-stage in the play is a giant pedicab containing goods for sale. It’s Madonna’s cherished possession and her primary means of livelihood, perhaps a microcosm of our dear nation. “Madonna Brava ng Mindanao” is a kind of play that is not meant to be enjoyed. It’s a living protest for the horrors experienced by Filipinos in the south and something has to be done.

DUP’s “Amphitryon”, on the other hand, is a pleaser and a feel-good play. The audience reacted and laughed as expected in this tale of errors. What’s worthy of all is the effort not to brutalize the concept of being visited by gods like Jupiter and Mercury. Mortal Ampitryon’s dilemma is somewhat similar to Joseph’s when wife Mary had baby Jesus through Immaculate Conception. The stage has a bed as the centerpiece. It is surrounded by a forest of white paper pinwheels and occasionally fenced by a “moving” gate. The transformation of the set from a dull night to a magical evening towards the end of the play is very charming. Furthermore, Jose Estrella’s take on comedy is a winner. Her attention to movement details and blockings is first-rate. The ensemble headed by Neil Ryan Sese, Gilleth Sandico (with Diana Malahay alternating for the role of Alkmene), Lex Marcos and TP alumni George de Jesus and Paolo O’Hara is just an incing on the cake

Lastly, watching PETA’s “Ismail at Isabel” is like swallowing a strawberry-flavored cough syrup. Beyond the musical play’s vivid set, highlighted by a playful audio-visual of shadow puppetry, is an irksome story of Hansel and Gretel-like kids who at a young age experienced the terror caused by the war in Mindanao. They had to endure a misadventure of a lifetime that got them separated. Muslim Ismail became a young hustler who graduated from being a pirated DVD vendor while Christian Isabel happened to be a nanny of a rich gradeschooler. Their reunion gives hope to a stark reality and should serve as an eye-opener. To help downplay the weighty material is a series of fairy tales told through song and dance numbers and it works. Worth noting is, for the first time, hearing a musical piece about, err, bootleg DVDs.
Posted by Manuel Pangaruy, Jr. at 9:22 AM

thanks for watching ismail at isabel.
please invite your friends to watch it too :)

This is a question for the webmaster/admin here at taga-ilog-special.blogspot.com.

Can I use part of the information from your post above if I provide a link back to this website?