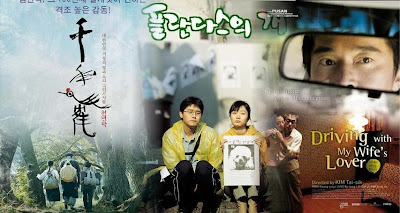 There was this feeling of guilt when I headed to The Shang last Sunday, September 27, to queue for this year’s Korean Film Festival (which was making a return after a long hiatus). I was aware that most Metro Manila residents then were struggling with floods caused by typhoon Ondoy and yet, there I was, enjoying a film marathon. I just thought that maybe, the films were some kind of a treat after being stranded in Alabang the day before (that was a lame excuse, I know). On a different note, it must be the sense of adventure in me (in case there is one). Having in mind that it was still raining and EDSA could be soaked again big time. Oh well, Manuel. All for the love of movies…

Im Kwon-taek’s “Beyond the Years” (Chun Nyun Hack). This love story of two foster children is told through different facets of time. It transcends music, life, death, blindness and even socially relevant concerns like migration. It isn’t really clear if the two star-crossed lovers finally meet in the end but the well-shot film shows how love can be timeless.

Bong Jon-hoo’s “Barking Dogs Never Bite” (Flandersui Gae). What would happen if you plan to kill a dog that keeps on barking and got the nerves out of you, and realize later that you had the wrong dog? This is the premise of this dark comedy about life on residential buildings, bribery and petting dogs. The lead character somewhat resolves all the knots that come into his life with an epiphany that everything is not easy as expected.

Kim Tai-sik’s “Driving with my Wife’s Lover (Ane-eui Aein-eul Mannada). Its plot strikes a semblance to Wong Kar Wai’s “In the Mood for Love” less the stylish slow-mo shots. This Korean film on husband-wife musical chairs comes into full circle when compassion shifts from the husband then to the wife’s lover. The road film part of the movie is very poetic and highly entertaining.
Posted by Manuel Pangaruy, Jr. at 1:55 PM