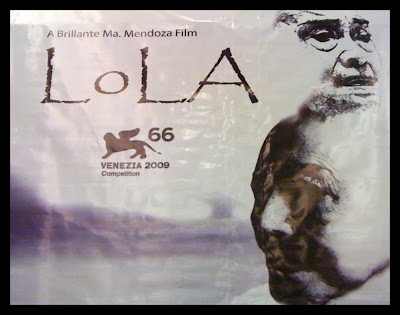 The film narrates two intersecting lives of grannies Lola Sepa and Lola Puring as a paean for every senior Filipino citizen’s struggle against poverty and justice. It opens with Lola Sepa visiting a spot under a bridge where her grandson was stabbed to death just the other day. She is later on shown visiting a funeral parlor, collecting money and visiting a precinct to file for a police blotter. On the same precinct and on the same moment that Lola Sepa is present, Lola Puring arrives to visit her jailed grandson. It is then made clear that Lola Puring’s grandson killed Lola Sepa’s grandson. The spotlight now shifts to Lola Puring, getting a glimpse of her life as a vegetable vendor and a nurse to her bedridden son. What follows is a series of scenes that depict in parallel how the two grannies carry their own set of crosses.

First and foremost, I appreciate that the film perfectly catches a pigment of Metro Manila at its wettest season without the help of any CGI or studio rainmaker. As far as I know, this is not achieved yet in any local production. The opening sequence, for instance, showcase a windy atmosphere and this synchronizes the dilemma that Lola Sepa is harboring. Most of the scenes consistently capture heavy rains and, at the height of it, a flooded area somewhere in Malabon was used as location for Lola Sepa’s neighborhood. Some of the moviegoers during the screening even kidded that maybe this is the reason why the film got chosen in Venice. But for sure, the film is a little more than that.

Script-wise, hands down, there is an overflowing honesty in Linda Casimiro’s work. She must be a grandmother herself to understand the details for a competent characterization of the two leads. Lola Sepa and Lola Puring are not just grannies, as sadly portrayed in most films here and abroad, but breathing and feeling individuals. Textured characterization could be a better description here. I have to note that this is the first Brillante Mendoza film that has no association with the great Bing Lao and the absence is very much felt all through out the movie. “Masahista”, “Serbis”, “Kinatay” or even “Tirador” and “Manoro” were written with both mind and heart while “Lola” is plainly all heart. The saving grace is that Brillante Mendoza’s realistic approach somewhat elevates the film from other locally produced works that were written in the same manner.

Some acting moments from both Anita Linda and Rustica Carpio are deemed noteworthy. The scene where Anita Linda is trapped in front of a closed toilet is effective. This is equally feted in one sequence that shows Rustica Carpio cheating on a vegetable buyer. Their scene together in a restaurant is very natural. Unfortunately, this can’t be said for the rest of the cast. I can sense that Jhong Hilario, though a good actor, is being “directed”. Same observation goes with the non-actor inside the funeral parlor and the old guy in the train station.

There’s a small scene here in there that stands out for me. For one, the opening sequence creates an eery apocalyptic feel that interludes an upcoming demise. When the musical score starts grinding during the wake on the night before the burial, the scenes imbued with it are well romanticized. The funeral procession shot in the flooded area is another example of a sight to behold.

“Lola” may not be Brillante Mendoza’s best work to date but the final product is very much serviceable. The vision is there as expected and that’s what matters the most for now.
Posted by Manuel Pangaruy, Jr. at 10:46 AM