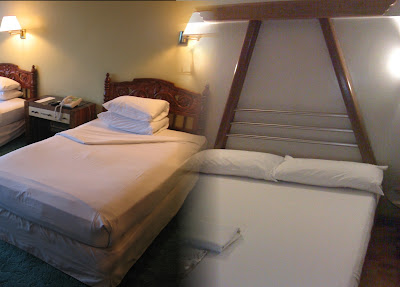 In the picture are stitched photos of two hotel/motel beds.

It was my third trip back to the Netherlands for the last leg of an onsite assignment. Flight was at 8am. As far as I remember, NAIA was in struggle then with strong wind and heavy rains. Ceilings were starting to disintegrate and travelers for those flights that were not canceled yet, mine included, were asked to stay put. At close to 12pm, we were ushered in to the plane. I slept for an hour or so and woke up to a wobbly plane. I thought we were already flying, only to find out later that we hadn’t even taken off.

A few more minutes after, we were asked to take a service bus. We were brought to Manila Hotel for late lunch and to have rest for a 10pm flight. The inventory of names and room key distribution were both chaotic but the buffets (lunch and dinner) were good. That time, celfone networks were down and I couldn’t contact my folks in the province (worse, Facebook was not around yet). I was given a standard room with two beds but since I was all by my lonesome, the airline company didn’t bother to have me share a room with a co-passenger. At 8pm-ish, we were brought back to NAIA and, two hours later, the flight went smoothly.

I signed up for the company’s volunteer work at Elsie Gaches Village in Alabang. Most of morning on that day, just like any other volunteer, was spent playing with the kids, cheering for them during parlor games and interacting with them. The activities were occasionally slowed down by strong wind and heavy rains but it went fine. Together with Miss Jenny and husband Edward, we left the village at 12pm past. Getting out of Alabang’s business district area was a bit fun. That didn’t last long enough though. When we realized that Makati-bound SLEX was already flooded and that vehicles blocking us were already stuck as early as 8am, we headed back to Alabang Town Center (ATC) to recharge.

We had coffee and tea at Starbucks and bought a map at National Bookstore shortly after watching a badminton tournament at the mall’s activity center. Then we used the map to strategize our luck through Filinvest exit. We even bought more food in case we’re stuck for a time (I had hopiang Macau, Jack n’ Jill Pretzels and Fit n’ Right). Off we went to Filinvest Tollgate only to find out that all vehicles were U-turning. Last resort was through Coastal Road. It was in the middle of Alabang – Zapote Road when we received a call from our HR head advising that we’d rather assemble at ATC then be billeted at a nearby hotel.

The three of us (the Cruzes and me) were already imagining the likes of Bellevue and Vivere but those scouting for the hotel had a hard time securing one. That was understandable since our headcount reached 40 peeps (those with car and riding the bus) at least. We stayed at ATC for a few hours more buying medicine, toiletry, extra clothes/undies and celfone charger (shops starting to close as early as 4pm). We even treated ourselves with a nice dinner at Pepper Lunch. At around 7pm, we got the news that all of us will be staying at, err, Victoria Court in Las Piñas. I ended up occupying a standard room.

The volunteer from other department that I will be sharing the room with decided to stay in his colleagues’ bigger room. I did nothing but monitor the typhoon through television. I slept early and sound, something I deserved for a taxing day that started as early as 6am. Breakfast was room serviced at 7am (I had pork with mushroom rice toppings) then left the place with the Cruzes at 8:30am. We passed by at Mc Do near ATC for coffee fix and off we went to SLEX through Filinvest Exit. For the novelty of it all, I had fun but the other side of me, of course, is pained for those who are gravely affected by the typhoon.