Weekend in One Paragraph 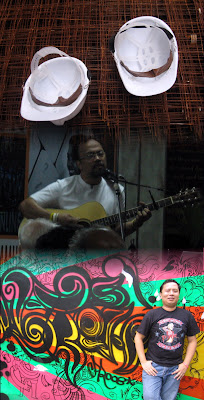 Evening of Friday was spent with office lunchmates watching Fall Out Boy concert at the Araneta Coliseum. The experience was far from falling out, no pun intended, except for the long queue courtesy of a thorough bag inspection. We only caught front act band Chicosci's last song and the most important yell of the segment, "Give your hands to Joel!". Hot calamansi juice and some sizzling pica-pica followed after at Grilla in Libis. 1am bedtime, 5:15am wake-up call. Saturday morning and most of the afternoon were bestowed building homes at Habitat for Humanity in Taguig. Tiring. But fulfilling. It was my first time to do something like that. Power nap came after and woke up at 6pm just in time for an event at Titus Brandsma along Rosario Drive. There was a jubilee celebration for the Carmelites. Poetry, food and music from Noel Cabangon. Hearing "Kanlungan" live for the first time was indeed a big deal. Late night was exhausted buying Robbie Williams' last two albums ("Rudebox" and "Intensive Care") at Greenbelt 3's Music One. I slept dreaming to get a copy of Rob's first two albums ("Life Thru a Lens" and "The Ego Has Landed"). Sunday morning started at noon mass followed by a Reposo walk to remember along with paintings on the wall. It was fun. Late lunch at Yellow Cab in the People Support building in Ayala corner Buendia. It was raining hard for 30 good minutes. 3pm, Avenue Q redux. The rest of the afternoon was coughed up buying a Bella Flores shirt for my landlady (a clever birthday gift) and Jessica Hagedorn's "Dogeaters" (soon to be staged by Atlantis Productions). Rested for roughly three hours. At 11pm, my roommate and I were at Blush Bar in Burgos trying to catch the Man U vs Chelsea game. It was comforting that we didn't catch the via satallite match because Chelsea lost, 2-0. There was a problem with the signal, informed by the girl in two-piece leading the pack of a dozen other GROs gyrating in an Akon song. Midnight and an SMB Light, a perfect concoction for a nice week ahead.
Posted by Manuel Pangaruy, Jr. at 9:07 AM