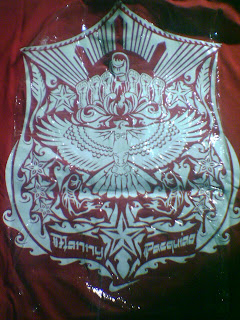 Just in time for the Pacquiao - Barrera rematch on October 7 (which I will be watching live through a via satellite programming at Powerplant Cinemas), Nike Philippines launched a shirt with a print inspired by Manny Pacquiao's contribution as Pinoy sportsman. I've read an article from PDI explaining back-of-the-shirt's emblem but I'm too lazy to surf now. I scored the shirt (red and white colors only, intending to remind us with "sa pula, sa puti" thing?) for P895. It's a good buy though. I'll be wearing it during the fight. Go, go, tukayo! Let Barrera eat dust!
Posted by Manuel Pangaruy, Jr. at 8:48 PM