Flu Weekend and Beyond 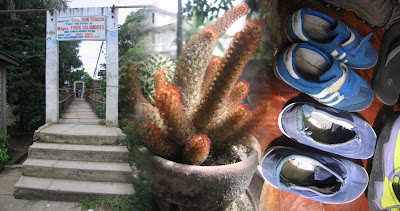 This blog could be entitled "How to Bring a Roommate in your Hometown" but no, the flu and slight fever are too overwhelming not to pass for a subject.

All right. That weekend started with a morning breakfast at Goldilocks in the corner of Taft Avenue and Buendia. Hurriedly we were off to Lucena through Jac Liner.

At 11am-ish, we were already at SM Lucena. There was a mall-wide sale and it was a bit crowded. When we went to supermarket's baggage counter (the other counter's at the department store), we were asked by the staff where are we heading. It was odd but I understand what the guy was hitting at. We were carrying two big bags with retiring CDs and some clothes that are garage sale-ready. I lied by saying that we're getting something from the supermarket. The next 30 minutes were spent shopping for a pair of walkings shorts, some VCDs (Gaiman's "Mirrormask", Solito's "Tuli" and Topel Lee's debut film "Dilim") and a box of Red Ribbon goodies for my folks. What followed was a long waiting game with the FX that would bring us to Lopez. It was hot and energy zapping.

But I guess Saturday wasn't that bad because we met and got to know a BS Bio student from SLPC (in Lucban, Quezon) named Thessa. She's cute and smart and just fun to talk with. We came from the same highschool but the age gap is like "gaaaaaaaaaaaaaap". We ended the conversation upon entering the Quezon National Park. That's the time that I had to wear my tourist guide hat to my roommate. Zigzag is definitely the highlight of any road trip in Quezon when you're taking the National Highway.

The rest of the weekend was spent with hearty food, lambingan moment with my folks, testing my DVD player (too bad that it stopped creating stereo sound and had to be brought to a repair center), attending the mass in English (this one is new in our parish), taking pictures of my highschool and reaching the part of the campus called "hill" where a statue of Manuel Luis Quezon is kept.

Only on our way back to Manila that I started coughing heavily. No good. Along SLEX, there was a minor mishap with a drunk guy asking for his bus ticket (which he accidentally lost). He demanded the bus to stop and this irked the rest of the passengers. This was punctuated by an untimely military check-up. Maybe it was just me but it's annoying to see a bunch of men in uniform inspecting your bags as if you're hiding a deadly weapon or something. Experiences like that are deadly enough, thanks to Erap for being guilty on plunder.

Oh well, Joel (of Chicosci, of course). Monday came and it was the most painful working day I ever had in years (misery loves exaggeration, hehehe). I was coughing hard and my words were difficult to debug due to colds. My way back to the apartment was a struggle. Sometimes being high with alcohol and having fever are synonimous to each other.

Tuesday morning came. I was feeling OK but my mind was protesting. Right there and then, I decided to take my very first SL for the year. Rest, rest, rest. At past noon, I was A-OK. I was already sweating and I felt ready to get my ass back to work. My roommate who wished me well asked me if I wanted to visit the Books for Less branch in Salcedo where Gaiman's "Neverwhere" was waiting for us to be brought home. I said yes.

On our way back to the apartment, a Quiapo-bound bus passed by. Three hours later, Gaiman's "Neverwhere" was already joined by a bootleg DVD copy of "Sicko", "The Lives of Others", "Sweeney Todd", "Duck Soup" and "Deathproof" (plus Robbie Williams 9-in-1 concert DVD and "Goal 2" on my roommate's stash).

Wednesday, I was already back to work. Healing is indeed relative. SL, overrated.
Posted by Manuel Pangaruy, Jr. at 10:15 AM