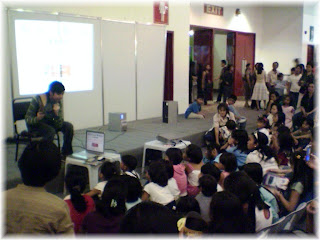 I went to World Trade Center along Roxas Boulevard last Saturday, September 1 (a good start for the first Ber Month!), to take a peek at this year’s book fair. National Book Store normally organizes an event like this in Mega Trade Hall but this time, they’re trying to get global. Too bad that the fair had one weekend only. As my colleagues cry in unison: “nakakalula sa dami ng libro!” The storytelling with Sam Concepcion and Maricel Laxa was just one of the activities there. I also got a glimpse of an “Art Angel” taping for GMA-7.

For an estimate of P1,500, my kart was filled with the following goodies:

1. Fever Pitch by Nick Hornby
2. Smoke and Mirrors by Neil Gaiman
3. Everything’s Eventual by Stephen King (a collection of 14 dark tales including the short story “1408” where the John Cusack film was based)
4. Christ the Lord by Anne Rice (the book that allegedly made her Catholic again)
5. The Golden Compass by Philip Pullman (a must-read before the December screening of the film)
6. Word Source (a vocabulary enhancement thingy)
7. Darna comics from Mango (3-in-1, plus a generous poster of Angel Locsin wearing the costume)
8. Lastikman comics from Mango
Posted by Manuel Pangaruy, Jr. at 12:47 AM