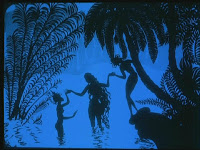 Damn. I was hit. Just now. I don’t know what happened or what I have done uniquely this morning but I don’t feel like feeling. It must be the mango bravo that I had for Socs’ cake thingy at the office. I don’t know. This might be one of those zombie days when you’re temporary losing the drive and the reason, and the answers are nowhere to be found.

Actually, I just had a ‘battery charge’ last night. I went to the first night of the 1st International Silent Film Festival at Greenbelt 3. It wasn’t really a big deal, just three entries from three cultural centers namely Goethe Institut, Instituto Cervantes and Japan Foundation. Last night’s was the screening of the earliest existing feature-length animation film entitled “The Adventures of Prince Achmed” (1926, years before Walt Disney’s “Snow White”, if I’m not mistaken). Wikipedia says the first one came from Argentina but to date, no copy is archived.

The experience was one for the books for so many reasons. Firstly, a friend from Pelikula@Titus got me a ticket from Goethe for free. It’s been ages since I got a free movie ticket. I can’t even remember when was it. Secondly, there was a cocktail being served before the screening. It was my first time to really grab a food and tried hard to mingle with people on a red carpet film event similar to that. Wine was flooding. Caucasians were everywhere. The moment was both alienating and welcoming.

On top of these, the film was awesome. I was stunned by the images, considering that it was filmed more than 80 years ago. And it wasn’t just images. It was really outstanding for its time. The scenes were clear, very elaborate (the animation was done using a method called “shadowing”) and suggestive of the drama or tension that the film is trying to convey.

And yet, everything is just gray now.
Posted by Manuel Pangaruy, Jr. at 10:06 AM