Not Another Back-to-Back Play Weekend 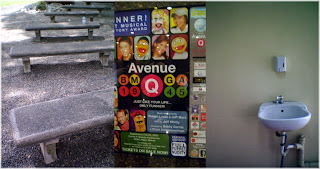 Yeah, I did it again. It’s the play season (which actually started last August) once again and every theater buff is giddy now about this annual kick-off (this nirvana lasts at least until February next year).

Puppets + music + The Simpsons’ humor? Go and watch this musical! This Atlantis’ local production of a Broadway hit, I’ve read from the program (P150 each), won some Tonys including Best Musical. One of its composers, Robert Lopez, also according to the program, is 3/8 Filipino. I don’t know how to enjoy a musical but this one’s a pleaser. Music is radio friendly and the content is in your nose. If there’s one exceptional thing about this production, it must be the Filipino talent. With conviction: voices of Rachel Alejandro, Aiza Seguerra, Frenchie Dy, Joel Trinidad and Felix Rivera far exceed the voices from the original OST. Mahusay talaga ang Noypi. On top of this revelation, the opening night (last Friday, September 7) that we’ve seen also boasted of a soup bowl of celebs: KC Concepcion and Lino Cayetano, Bituin Escalante, Jolina Magdangal, siblings Cherie Gil and Michael de Mesa, Agot Isidro, Jett Pangan, Buddy Zabala, Rajo Laurel and a lot more. I enjoyed the autograph signing part of the whole experience. And KC’s immaculate (conception) smile (pun intended). And hours well spent reminiscing good times at the RCBC Plaza (I miss the old office).

I was excited to see Floy Quintos’ Palanca-winning play by Ateneo Theater Arts Seniors 2008, not Tanghalang Ateneo, I was corrected, last Saturday, September 8, (it's raining commas here!) simply because it was my first time to visit THE university (and I hope to see my first TA production soon). I took a cab up to the Gonzaga Hall. No sweat. I didn’t get lost or something (though I was armed with a JPEG of the university map in my O2). I was expecting that the building is a bit remote and ghosts of Jesuit priests might be, hmm, reminiscing. It turned out that students doing their own thing peopled the place. The play, by the way, is a brave one. It tackles our conformity with art as three subplots (one each for music, visual arts and performing arts) intertwined in a riotous finale act. Fluid refers to art, as it cannot be molded into a solid block. As for the production group, I found the artists a mixture of promising amateurs and seasoned newbies. All the performers are students. Just the same, these young artists can definitely deliver. P150 of entrance ticket (which was returned to the usher when I got in) is worth it.

DUP’s second production for its 32nd season is The Bard’s “As You Like It”, a comedy, as translated by the great Rolando Tinio (I’m a fan of his works, Filipino translations included). What I love most about “Paano…” is that it doesn’t alienate. I don’t know about Shakespearean form or structure but I enjoyed this play (seen yesterday, September 9 at 10am) megged by Jose Estrella (another rare stalwart theater icon). The dances from the “koro” are another act worth watching, magical and well choreographed. Neil Ryan Sese’s Orlando and Nathasia Garrucha’s Rosalinda is a pair to watch.