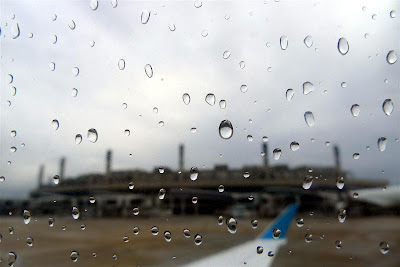 Our roomies arrived at close to 5am. Still drunk and a bit noisy but more friendly this time. One even farted out loud and they all laughed. They were accompanied by an Asian looking girl, who, according to Daryl, said that her name Titi sounds funny in Filipino/Tagalog (tell me about it). The cab that would bring us to the airport was on time and we left the place. It was a damp morning, very sentimental.

There’s nothing much to do in the airport. We consumed most of the time shopping for souvenirs. It was very expensive but we’re just thankful that we can still get a shot glass (and a pair of Havaianas, a bottle of Cachaca, fridge magnets and more).

To sum up our two-day trip, let me just list down the spots mentioned in Top 10 – Rio de Janeiro from the DK Eyewitness Travel publishing:

1. Corcovado. Done. In case I’ll be going back to Rio, I wish to visit the view deck at night;

2. Parque Nacional da Tijuca. Partly done. We didn’t trek in the forest but the train went through it. Can be viewed from the top of Corcovado;

5. Museu Nacional de Belas Artes. Not done but we saw this from the outside. I even took a picture with it;

6. Jardim Botânico. Done. I agree with what the book says that it offers a haven of peace. I hope to have a cup of coffee there next time;

8. Praça XV. Done. When we say downtown Rio, I will always be reminded of this plaza sandwiched by old and new buildings;

9. Praia de Copacabana. Done. We strolled along the sand at night but did not experience it on a sunny day (with sunbathing and all); and

10. Ipanema and Leblon Beachlife. Done. Just like Copacabana, we hope to enjoy it next time on a sunny day.

I can say that Rio de Janeiro is a must-see city in South America (or even around the world). It’s a combination of white sand beaches, high mountains and numerous historical and cultural spots; a unique city I would conclude. Tom Jobim is definitely right when he said:

“New York is great but it is crap. Rio (de Janeiro) is crap but it is great.”

The rest of the departure pictures here.
Posted by Manuel Pangaruy, Jr. at 11:38 AM