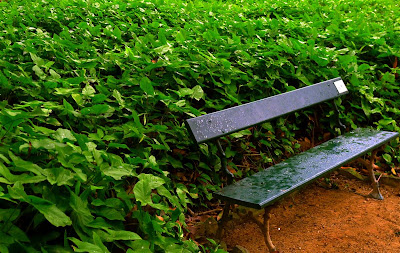 Our second (and last whole) day in Rio was spent mostly relaxing; something that can be attributed to what vacation is all about. We woke up an hour later than yesterday while roommates were still sleeping. We also managed to catch the hostel breakfast which starts at 8am. Compared to the one we had in Buenos Aires, the breakfast was more continental: toasts, butter, marmalade, ham and lots of fruits.

We took a cab again from the hostel going to Jardim Botânico (pictures here). It’s a huge botanic garden complete with alleys lined up with palm trees, a Japanese garden, a water lily pond, an orchidarium and more. We spend the whole gloomy morning there just chilling out and literally smelling the flowers. I enjoyed the visit. In fact, I got the most number of pictures from this spot.

(Species from the botanical garden)

Right before when we’re about to get a cab going to Garota de Ipanema restaurant, Bernardo, our officemate who lives in Rio picked us up for a joyride to his place called Barra which is another district along the beach. It leisurely gives us enough views on how Cariocas live in the area, favela life included. Bernardo also brought us to the hang gliding place (videos here, here, and here) but it was cloudy (though they were still operational). We had a share of corn there served a la Filipino vendor style. The lady selling it smiled when she saw me taking pictures of the corn. More highlights probably, aside from the sand, are the place where Ronhaldino once lived (or still using, I don’t remember) and a short trip to a refreshment bar called Bibi where we had our first taste of strawberry-flavored açai dessert topped with some granola (really, really good).

(From left to right: Barra beach, açai with granola and the Prainha coast)

The rest of the pictures taken from Barra and beyond here.

From there, we went further to the south called Prainha where a lovely beach coast was seen from a view deck. There’s nothing much to do there aside from conquering the southernmost part of Rio. At 3pm past, we were already on our way to Ipanema and Leblon where dropped us off. Though we haven’t had lunch that time, we didn’t go directly to a restaurant yet. We had some souvenir shopping to do at Feira Hippie Market which is open only on Sundays. I only got a t-shirt since we didn’t find any good shot glass in there. That signaled the start of another adventure for us, shot glass hunting on a Sunday evening.

We attempted to communicate with the police in the station near the plaza with the help of a phrase book and the minimal Spanish we know. It was an epic fail. Then we tried looking for shops in the beachfront but there’s none. We went to the nearest hotel and asked where we can find the souvenir items we’re looking for. The receptionist suggested a mall called Shopping Leblon so we took a cab going there as it is around ten blocks from where we were. By the looks of the mall’s façade alone, we’re sure that we couldn’t find a shot glass there but we still pushed our luck. The customer service girl, who speaks English fluently, said that the closest we can find is a photography shop. I called Marcio (yes, he’s free to accept inquiry over the phone or so I thought) and he said that in the area, the hippie market is the lone option. We did not rest our spirits there and decided to check back the souvenir shop we visited near the train station going to Corcovado. It was starting to rain and I can imagine the cab going around the Lagoa Rodrigo de Freitas. The train station was already closed when we got there, as well as the souvenir shop across the mini-park which was empty and quiet that time. We then asked the driver to just bring us back to Ipanema, specifically to Garota de Ipanema Restaurant for a comfort lunch, or dinner, that we all deserve.

The pedigree of the restaurant, by the way, is that the song “Garota de Ipanema” (popularized by Frank Sinatra as “Girl from Ipanema” with a long e) was written by Carlos Antonio “Tom” Jobim there. It used to have another name but the owner decided to make use of the fame it’s getting. I don’t know if the “real girl” is still around but I remember another episode of The Amazing Race a couple of seasons ago where the teams were tasked to look for her at Ipanema beach. Maybe we were too hungry and tiresome that time. We finished two servings of churrascaria/picanha style dish, which, according to Marcio, is good for three per order. The food is served on a grille with the meat half cooked. It’s up to us to finish the cooking which kept us busy for a few minutes more.

We explored more of Ipanema by walking along the mosaic-filled pavements, went back to where the hippie market was stalled and took a metro ride from there. It wasn’t busy for a Sunday train ride. Ticketing system is state-of-the-art and route details are available including a portion for the blind (it’s in Braille), something that is new to me. The station where we got out is just across the hostel (one of the perks why we chose it).

At past 9pm, we were back to our hostel room. We changed clothes (my first time to wear the beach shorts I bought just for the trip), put on our chinelos (Brazilian/Portuguese for slippers) and headed to the Copacabana beach. We walked up to the Copacabana Palace (the very first hotel in the city and is featured in the U2 music video “Walk On”) and walked back in the sand trying to endure the cool breeze. Our leisure walk culminated in one of those generic yellow stalls that sell snack and coconut drink. I had my first authentic caipirinha (which is stronger than the ones I tried in El Pony Pisador in Montevideo) and Daryl, Jacq and Mike had soda while enjoying a basketball match on TV between Brazil and Argentina. We left the beach when the game was over. More pictures of Copacabana, Ipanema and Leblon beaches here.

The rest of the evening was spent packing our things. I decided to take a bath at midnight in preparation for the early morning departure.