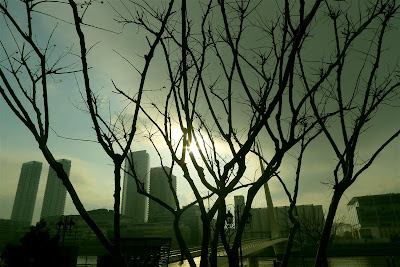 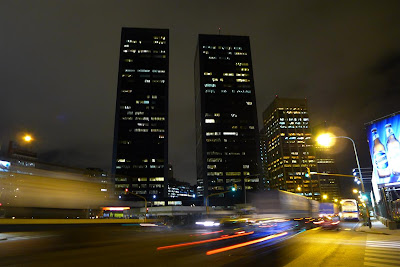 (Left: Puerto Madero in the morning; Right: Some buildings in Buenos Aires during rush hour)

Fabricio, our colleague/friend, was already at the waiting area when we arrived. We didn’t notice the exact time (probably we’re too happy to notice it). Mike was stuck in the baggage claim area as a lot of passengers were waiting for their luggage, typical to having a plane ride. So if you’re in a hurry, you better not check in your carry-on bag and just bring it with you in the ferry. That is, of course, if the Buquebus staff allows you to do so. After 15 minutes or more, we were finally on our way to Puerto Madero. Daryl was shaking our hands, congratulating us for making it to Argentina.

Coming from Montevideo which is a laid back city, the first things you will notice in Buenos Aires are the tall buildings. Even though you can see it from the ferry, it’s different when you’re actually walking through the streets where the skyscrapers are located. There’s a charm when you see those modern buildings swamping the old and historic ones. In Puerto Madero for instance, walking from Buquebus station to the iconic Puente de Mujer, you can see modern office buildings on the other side of the canal (with body of water coming from Rio de la Plata) and some old buildings including the Casa Rosada on the right. There’s a long stretch of restaurants in there, housed in a brick orange-like building. In between blocks, there’s a yellow metal structure that looks like a crane to me. It adds a feel that the area is being constructed but in fact, those are more of an art piece. Beneath it, for instance, you can find a tourist information center.

We spent almost the whole morning strolling along Puerto Madero still with our bags on. It was that breezy and pleasant and we barely noticed the long walk we had. We stopped at Starbucks (the branch is very artsy and classy) and had breakfast (I got a miga which is your usual loaf bread sandwich without the thick/toasted crust) there then visited the Oracle office which are all on the other side of the canal. From there, we crossed the canal through Puente de Mujer, walked to Plaza de Mayo (where Cabildo and Casa Rosada can be found) and took the subway (very Rome-like) heading to a station near Avenida 9 de Julio. The iconic obelisk is right there. We crossed the widest avenue in the world (9 de Julio) through Avenida Corrientes then took a left at Avenida Libertad. A few more blocks of walking and we’re finally in our hotel.

Gran Hotel Libertad is nothing fancy. From booking.com, I just grabbed the cheapest hotel that is near the main avenidas (Corrientes and 9 de Julio) and had the nod from another Argentinean colleague/friend (Nestor). Libertad is a bit Ongpin-ish or Ronquillo-ish in the morning and very quiet in the evening (too quiet for a single traveler walking from Avenida Corrientes). What we got is a quadruple room with four beds separated by a door. The bathroom is in the room that Mike and I picked so we always see Daryl and Pao on their way to take a bath (or other business). Beds are just OK but we can’t fix our heater. It’s just fortunate that they have thick blankets. The closet has a mini-vault that could serve as a locker for the valuables. You just need to request for the lock and key from the reception area on the ground floor. It’s free but you need to sign a paper that looks like a disclaimer to me.

After a short break at the hotel, we headed to Diagonal Norte to get a ticket for the yellow tourist bus (the sign on the side says “Buenos Aires Bus”). One day of hop-on, hop-off costs Argentine Peso or ARS 70 (PHP 705) and ARS 90 (PHP 906) for two days. We got the latter. Since it is the Zero Stop, we had to wait for the designated time. This brought us to one big and very busy branch of Burger King along Avenida Florida for a late lunch.

We took a seat on the bus’ open top on the second level. For an afternoon August breeze, it was cold. I remember the bus stopping first at Plaza de Mayo. The English recorded tour wasn’t working well at first but they eventually fixed it. It’s good to appreciate the significance of the different old buildings along Avenida de Mayo and how they played in the city’s cultural and historic bustle.

We availed of our first hop-off at La Boca (the rest of the pictures here). We walked through El Caminito which is a colorful cobblestoned street (literally as the walls are painted with different bright colors) with some locals selling some artwork or wearing a tango get-up for a paid photo opportunity. I was informed that tango was born in the area (and Madonna had her tango lessons there, too, for the filming of “Evita”). It’s a feast to the eye. In fact, the most number of pictures in my camera belong to this area. Some were dancing tango in front of the restaurants to attract customers and some were playing live music. One restaurateur even offered us to look at the little house inside the backyard where tables are set for some parrilla.

We went back to the stop and hopped on to our next stop which is San Telmo. It’s another old neighborhood but not that colorful. We passed by an antique shop, paid Mafalda (an Argentine kiddie character who is also popular in Uruguay) a visit and had a crepe in one restaurant there. The rest of San Telmo pictures here and a fascinating video of a dynamic artwork here.

The rest of the evening was spent with more walking. Sure it was tiring but there are a lot of interesting spots (architecture, monument, little parks, etc.) to see along the way. It’s a treat that our hotel is near Avenida Corrientes which transforms into a Broadway-like atmosphere at night. I don’t know if you still remember the movie adaptation of “Evita” but in the track “Buenos Aires”, Madonna is seen dancing along this avenue. We capped the night with a nice dinner at Las Cañas which is a food haunt for the locals according to Fabricio. That’s where I had my first Argentine beef (the dish is called Bife de Chorizo) and it’s one of the best grilled beef dishes I’ve tried. Pictures of all our dinners in Buenos Aires here.

The rest of the pictures here.
Posted by Manuel Pangaruy, Jr. at 8:43 PM