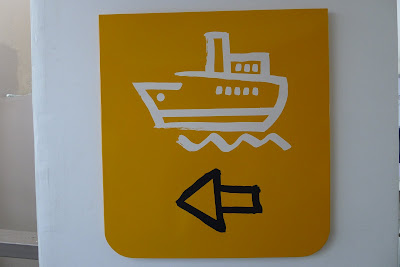 Our scheduled trip back to Colonia was at 12:30pm so we didn’t have enough time to stroll. We checked out at 10am and Fabricio was already there when we went to the lobby. We then headed to Mc Donald’s along Avenida Florida to jumpstart our last and shortest day in Buenos Aires. At 11am, whether we liked it or not, we were already at the Buquebus station at Puerto Madero.

Let me just list down the Top 10 picks from DK Eyewitness Travel and have a check on each:

(From top row, left to right: the Cabildo in Plaza de Mayo, the church near Cementerio de la Recoleta, performance hall in Teatro Colón, an old building along Avenida de Mayo, facade of the Museo Nacional de Bellas Artes, a terrace in San Telmo, El Obelisco, facade of MALBA and a milonga)

1. Plaza de Mayo. We did this from the Puerto Madero during our first day. Too bad that we didn’t stay there for long. If ever I will be going back to Buenos Aires, I want to do the Casa Rosada tour;

2. Cementerio de la Recoleta. Check. Got to see the tomb of Evita and the gigantic artwork called Floralis Genérica;

3. Teatro Colón. Done, too, but maybe a good opera will seal the deal next time.

4. Avenida de Mayo. We also did this on our first day, specifically during the Buenos Aires Bus trip. I remember one small theater there where, according to the recording, a Lorca play was performed (with Lorca himself);

5. Museo Nacional de Bellas Artes. Not done but we passed by to this museum on our way to Recoleta Cemetery;

7. Avenida 9 de Julio. To and from our hotel, we always passed by this avenue which happens to be the widest in the world. The iconic obelisk is just right there;

8. Museo de Arte Latinoamericano de Buenos Aires (MALBA). Similar to Museo Nacional de Bellas Artes, we alighted in this museum and passed by. While waiting for our bus, I managed to visit the shop but I didn’t buy any;

9. Colonia del Sacramento, Uruguay. I don’t know which gets offended with what but for crying out loud, Uruguay is another country and it’s not under Argentina. We have visited the place for a couple of times now; and

10. Tango. Best experienced in a milonga, I would think.

So for four days, we realized a lot of things about Argentina. Prior to our trip and based on the people who had been there, I had an impression about Porteños (Buenos Aires locals) being ill-mannered. Sure the lady staff in our first bus trip was a little unreasonable but she doesn’t represent the rest of the population (pretty much a universal thought). Restaurant staffs are cool and even store managers make it a point to serve the customers well. To top it all, I find them more of artsy than rude as shown in their street art, theaters and architecture. I also learned about petty crimes being so prevalent in the city. That’s the same warning I got when I visited Madrid and I survived it. Fortunately, I survived Buenos Aires, too. Usual stuff should still be considered: be extra alert in crowded areas, take care of your valuables, avoid trusting the strangers, etc. and that’s about it. There are many things to see and do in the city and we barely had enough time to discover it all. That’s aside, of course, from one important realization that I didn’t find any corned beef in Argentina.

The rest of the pics on our departure day here.
Posted by Manuel Pangaruy, Jr. at 11:32 PM