Buenos Aires – Day 03: Teatro Colón, Parrilla and That Resto-Bar with Board Games 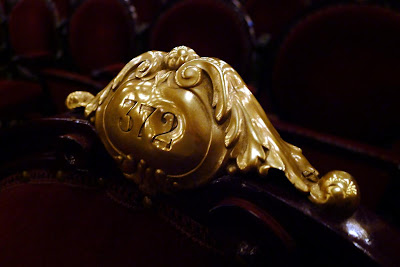 Third day was the most relaxing as we didn’t have a busy itinerary. Medialuna breakfast again and off we went to Teatro Colón which is conveniently located in the same street where our hotel is (just five to six blocks away). The entrance is at Avenida Libertad but the back of the building can be seen from Avenida 9 de Julio.

(Snapshots of a chandelier, tiles on the floor and La Cúpula inside the Teatro Colón)

Teatro Colón will not become world class for nothing. Aside from the beautiful interior, it boasts of a perfect acoustic according to our tour guide. The tour, by the way, has a schedule. We arrived at close to 11am and the guided tour was for 30 minutes later. I don’t think you can get inside the theater without availing of the tour which costs at around ARS 60 (PHP 602). There are some areas where photography is not allowed and in the performance hall, it depends whether a rehearsal is ongoing or not. In our experience, a rehearsal was about to take place so we were still allowed to take pictures from there. There’s a Versailles-like hallway on the second floor that is painted with real gold. Some of the details, as highlighted by our guide, were the result of the renovation that took years. Unfortunately, photography is strictly not permissible in that section.

More pictures of the theater here.

From the theater, we walked back to Avenida Corrientes and picked up Fabricio’s car. We had a side trip back to La Boca to check the painting that Daryl was eyeing about. Tough luck, the seller wasn’t around. Then at 2pm-ish, we were already at Nestor’s place for the late parrilla lunch. We reached the place after having a quick visit at the nearby Carrefour. The area is already outside the city of Buenos Aires. It is part of Buenos Aires, the province, which, a bit perplex to know, doesn’t govern the city. It’s not like New York, New York where the city is part of the state. Buenos Aires, the city, is a province and a city on its own. And since Nestor’s place is already outside the city, it has its own set of traffic laws. For instance, if you’re about to turn left in an intersection, you need to take the rightmost lane.

The first thing you’ll notice in Nestor’s house (we created a Foursquare entry for it under the name “Palazzo Spedalieri”) is that it’s more of a home than a house. Toys, kiddie tables and musical instruments are everywhere. It may be too much to say that the kids Astor and Isabella are well loved by their parents. We headed directly to the backyard where the parrilla is located. Ayelen, by the way, was already there ahead of us. Beef and chorizo were being grilled and there we shared some wine and pica-pica. Daryl couldn’t resist the basketball ring beside the covered area. Astor asked me to create a paper plane for him. Quite a nice Saturday afternoon, I would say. It was spent with good food, lazy conversations, some music and a dash of Argentinean hospitality.

More of Palazzo Spedalieri here. Plus a video here, here and here.

Fresh from the relaxing afternoon, we found ourselves rushing for dinner. We needed to head back to the city to catch the table that Fabricio had reserved at Aca Bar. Since not everybody can fit in the car, Daryl, Ayelen and I had to take the bus. It was Saturday evening and some roads are mildly clogged but still bearable. In a bus stop along Avenida 9 de Julio, we had to walk fast to the hotel make it on time. The bar is actually close to the city/province boundary but we all had to go back to the hotel to freshen up. We made it of course.

(The cue cards we were holding are actually the menu entries; rightmost is the Sexyonary game)

Aca Bar, according to Fabricio, is a word play on its own. Yes, it works as Aca Bar but I heard that “acabar” is a word in Spanish which means, if I heard it right, “to cum”. It wasn’t yet crowded when we reached the place. It’s cinematically well lighted and art work is just everywhere. Their menu, all entries in cue cards, is a clever idea. But the main come-on there is that you can borrow a board game from their shelf (there’s a lot to choose from and they have many copies per game set) and play it there during or after dinner. We had a PG13 version of Pictionary called Sexyonary and it was swell.

From there, we walked for some blocks more and waited until 1:30am to get in the posh Honduras club. It is too posh for me, probably similar to Republiq at Resorts World which I haven’t experienced yet. Entrance fee is ARS 40 (PHP 402) with one drink inclusive. I had one bottle of Pronto, some wine and lots of partying spirit.