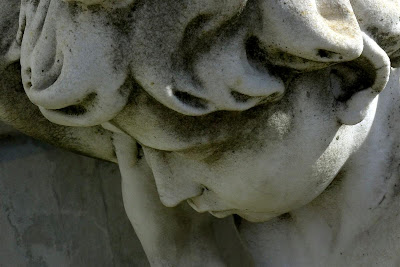 Our second day in Buenos Aires wasn’t that tiring as the previous day. It’s our first time to have breakfast in the hotel, Argentinian style. I usually expect a continental breakfast (which is the same in Aguas Calientes in Peru or in Berlin) with toasts, scrambled eggs, fruits and fresh juices. What we had is a basket of croissants (called medialuna in Spanish because of its half moon shape) and a choice of a drink like hot chocolate or coffee. Fabricio confirmed that it is their typical breakfast. Come to think of it, our equivalent for that is probably the pandesal at kape tandem.

At close to 11am, we were already walking along Avenida Florida to catch our hop-on, hop-off bus. I noticed that somebody’s pulling my bag from behind and I was surprised, amidst the massive warnings about pickpocket and robbery in the city, that it was Ayelen (true to South American Spanish, it is pronounced as A-je-len), another colleague/friend of the Manila Mafia. She then joined us on the tour. Apparently, the bus sells tickets along the way but it may vary (i.e. the bus is not yet full, etc.).

The plan for first stop was Recoleta. It’s just that during the trip, we saw this gigantic metallic flower that is usually found in postcards. We decided to alight in the nearest hop-off stop (which is the MALBA or Museo de Arte Latinamericano de Buenos Aires) and walked to Recoleta cemetery from there. Along Avenida Pres. F. Alcorta, we saw some posh residences and a couple of embassies. We passed by a TV station (Canal 7) and made a quick up close visit to the “flower” which is called Floralis Genérica. It’s a dynamic artwork by Danilo Catalano (just read it from the book) which blooms during daytime and closes its petals at noon.

From the flower, we passed by a university and took the bridge heading to the cemetery. We saw the Museo Nacional de Bellas Artes from there and we visited a department store that specializes home design. A few more meters’ walk and we were already at the entrance of the cemetery. In my entire travel life, the only other city where its cemetery serves as a tourist attraction is Cimetière du Père Lachaise in Paris. Sure, Recoleta doesn’t boast of Maria Callas, Jim Morrison and Oscar Wilde (in fact, it’s not that celebrated for a non-Argentinian like me) but the feel and the structure are similar. Its crowning glory, for the lack of description, is the resting place of Eva Duerte de Perón or simply Evita. If there’s one person that most Filipinos can easily recognize, it’s probably her. Either that Andrew Lloyd Webber – Tim Rice musical has a spot in us or it must be the parallelism between her and Imelda Marcos. While walking through the tombs, I made a prank at Ayelen by hiding in one corner, ran fast to the next two blocks and surprised her. That’s just well executed. The rest of Recoleta pictures here.

After the walk, we took the bus again in MALBA (after a harrowing run to catch an earlier one) and stopped at Barrio Chino (Chinatown). We met Nestor there along with his kids Astor and Isabella (quite cute and both are smart). It’s our first time to see him as a dad in action. The rest of the early noon was spent at Palitos, munching some dimsum and chowfan. Most of the dishes are good. It’s just that I have to admit that some are having some sort of identity crisis. The chopsuey, for instance, looked like a togue dish. My favorite is the chicken dish that is a kung pao to me sans the peanuts.

We then moved to another area which is around ten blocks away from Barrio Chino. Fabricio said that one church is called Redonda because of its shape. Opposite that is a dessert place called Volta. They have a wide range of drinks from coffee to mixed ice cream and some cakes. I forgot the tiny cake I had but sure it was really good. For my drink, I had Submarino. It’s hot milk with a piece of chocolate bar that is shaped like a submarine. The chocolate had to be dropped in the milk and mix it until it becomes brown.

Ayelen, Nestor and kids had to leave afterwards. I think it was already 6pm. Manila Mafia and Fabricio walked some blocks more to check for a jersey for Daryl and Mike. Along the way came another surprise: DeLorean DMC-12 from the movie “Back to the Future”, on display in one gadget shop. Apparently, it was authentic. Christopher Lloyd was in Buenos Aires to shoot a commercial that makes use of his character from the Robert Zemeckis film. Of course I took a picture of the car.

(Scenes from a milonga)

We capped the night with two events: a hearty dinner at Guitarrita (one of the best pizzas I’ve tasted during my entire stay here in South America) and our first hardcore tango experience at La Argentina (check out this video taken while we were on our way to the tango place). We had two options for the tango. One is to watch an expensive Broadway-style show with exhibition moves and costumes or go to a milonga where the locals shake their booty on a weekend. Fabricio chose the latter. I am not sure if the rest of the mafia liked it but I enjoyed this one a bit. The place is comparable to a ballroom place in Manila with the same set of patrons when it comes to age bracket. At least I can say that I’ve been to a place where tango is being immortalized. More tango pictures here and two videos here and here.

On our way back to the hotel, I was taking pictures of the streets at night from Fabricio’s car. In one red light stop, a couple from an adjacent cab was waving at me and gesturing as if they wanted to get photographed too. The girl then made a seductive pose, close to harassing/embarrassing her boyfriend. I gave in.

The rest of the photos here.
Posted by Manuel Pangaruy, Jr. at 6:20 AM