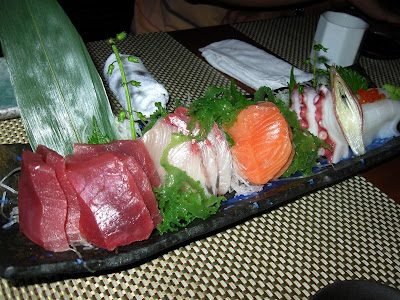 I frequented Makati Cinema Square area in Pasong Tamo before when it used to house two or three cinemas during its heydays. Now, it’s just another haven for bootleg DVDs and some celfone shops. Nearby is a Japanese place called Little Tokyo, which I usually ignore because of the impression that the food there is pricey.

Not until dinner time yesterday. With the “bosings”, off we tried this restaurant called Seryna which has a very good reputation when it comes to authentic Japanese food. According to one website, it’s a favorite spot among the Japanese here in Metro Manila.

Well, it is pricey, true, but the food is really great. The ambience is also, err, very Japanese (for the lack of words). They even have sliding door rooms that would require you to eat in Indian sit. Seeing the place being busy at 8pm is an indication that they are cooking (and serving) the right way.

I’m not a raw food connoisseur but the Goten Ten Mori (P505) that I tried from their Sashimi Moriawase selection is overwhelming for my appetite. It’s a long plate of mixed sashimi with tuna, salmon, squid, octopus and another fish variety. Since the Kaisen Gozen that was recommended to me prior to the visit is only available during lunch, the staff suggested an extra bowl of rice (P80) to complete the craving. Not really a good idea as the sashimi plate by itself is filling enough. Others tried ramen, tempura and spring roll dish that is cooked a la Vietnamese style. Miss Jenny said it’s really, really good.

Post-dinner was spent mostly at exploring Little Tokyo. We had takoyaki at Hana (P100 for six pieces) which is equally mouth-watering (and would probably be included in my best takoyaki list). For the real dessert, we had this green ice kachang-like sweet treat in melon flavor, also from Hana (P70). Invaded as well was the nearby Japanese grocery that sells goodies at P75 each (except probably for the smoked eel that Norman and Gray had). I bought two bags of chips that were recommended by the staff.

We left the place at close to 10pm after some picture-taking in the area. Takoyaki balls were still in the hot furnace and ten to fifteen people were still munching around. Satisfied as we were, planning for the next food stop is in tow. On my part, Little Tokyo, with a smile, check.