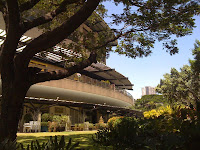 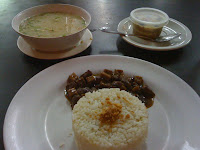 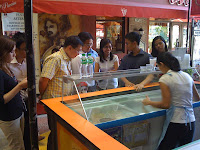 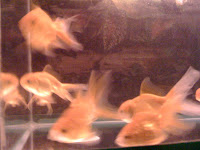 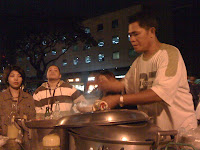 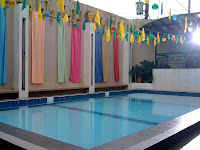 1. Greenbelt 5. On my way from Greenbelt 1 to Greenbelt 3 one lazy VL afternoon, I got a glimpse of this not-so-new addition to the Ayala Malls. Trees did the highlight;

2. Rufo’s Again. This time around, I tried a new dish called adobong tokwa (something like that). That’s for P40 plus an oriental soup (whatever that is) and crema de fruta. It’s good but I should be loyal to their beef tapa next time;

3. Josh’s Treat. It was meant to be a simple despedida lunch for Hubes at Zong’s but since it was Josh’s birthday week, the rest of his batch mates wooed him to have an ice cream treat. So, there you go;

4. Patio Jose. Visited the set of Daisy Siete’s Adam or Eve at this resort owned by Jose Manalo of Eat Bulaga. It’s located at Matahimik St. (though the area is not really that quiet) near V. Luna in Quezon City. I’m not sure about the price but it’s very similar to the swimming resorts in Antipolo;

5. Ayala Corner Buendia. It was past midnight on Labor Day. I took a jeep to Washington (now it sounds funny) and alighted at the Ayala corner Buendia just to try this pares right in the middle of the intersection. It costs roughly P30 and it was hot and delicious;

6. Other Fishes in the Aquarium. What’s with this aquarium and its calming effect?;
Posted by Manuel Pangaruy, Jr. at 11:39 PM