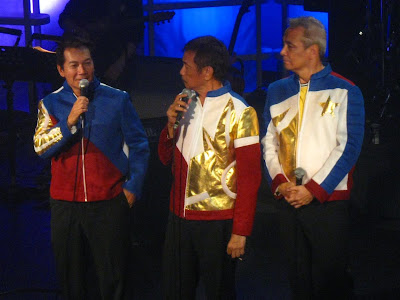 Maybe this week can be called the “good in goodbye” week.

While writing this blog, I’m listening to Apo’s last album called “Boboy, Jim and Danny – Apo Hiking Society” which has a stamp somewhere that reads “Final Edition”. I got it from last night’s concert “Paalam nAPO” which is a farewell concert series from the Atenista trio. Last night happens to be their very last together.

As opposed to other events that I had attended, this one kept me away from updating through my mobile. Basically I just wanted to enjoy the show from the group whose music shaped a big part of my high school life. No, don’t get me wrong. It was not the “Pumapatak Ang Ulan” or “Blue Jeans” days but more of songs from their album “Mga Kuwento ng Apo” which was released in 1990. From there is my favorite track (and probably my favorite Apo song) entitled “Huwag Masanay sa Pagmamahal” which is melodramatically dialogued by a fighting couple voiced by Sharon Cuneta and Edu Manzano. It’s actually a “duet” with Kuh Ledesma and it tells the consequences on being a slave of this thing called love. It asks “Bakit kailangan ng mayroong kasama?”, an oxymoron to their other song that consents the listener to love somebody else’s girlfriend (“Mahirap Magmahal ng Syota ng Iba”). Maybe it’s the melody that really struck me most then.

Also from the same album are other memorable songs “Awit ng Barkada” (which was my then circle of friends’ theme song), “Piece of the Peace” (a song our high school glee club sang during the United Nations Day), “Wala Nang Hahanapin Pa” (one of the most sensitive OPM songs about women) and “Sa Bawat Umaga” (a reggae-ish song written by Boboy, a take on paying tribute to your roots and positivism).

Back to the concert, it was opened by the all-female jazz trio Baihana (I’ve seen them before and they are good) then later on joined by the great Bituin Escalante. She quipped something like “Baihana is starting their career while the Apo is leaving and I am (in) Bituin.” The crowd liked it. Bituin did a haunting acoustic version of “Bato sa Buhangin”. Apo opened the concert with two numbers that tell something about forming a group and about what they are now. Then they sang “Pumapatak ang Ulan” which jumpstarted a string of their hits. Since concerts normally run for two hours only, they just sang a medley or excerpt of their other popular songs.

In between of course were some funny spiels about Danny’s two failed marriages and dark complexion, Boboy’s wavelength and Jim’s elite take on things. The church bell somewhere in the Visayas that rings “Dung, Dung” over “Ding Dong” is unforgettable. Along with the segment when they discussed hit song titles that are more of a question than an answer. It was supposed to be a battle of wits as Jim asked something like “Do You Know Where You’re Going To?” on which Boboy retorted with “New York, New York”. It ended with the most difficult question, “Nakaligo ka na ba sa dagat ng basura?” Boboy then asked, “Akala ko ba hits eh number three lang ‘yan ah!” The crowd laughed big time. The Philippine president apparent Noynoy Aquino was among those who watched and he was discreet about the joke. At one portion, the trio sang some possible Noynoy campaign jingles. One of it has lines that mention “Nakakalbo” and “May kapatid na maarte”. That’s really, really hilarious for the audience, Noynoy included.

Their encore song (check out the video here) was supposed to be a top 40 hits crossover with Filipino folk songs, an act that only the Apo can do (and I’m guessing that no OPM artist is brave and nationalistic enough to perform a number like that in the future). If you’ve been to one of their concerts, you’ve probably heard it. In fact, their version of top 40 is not that updated (the latest is Celine Dion’s “My Heart Will Go On” which is so late 90’s). Then they said goodbye and jumped altogether (there's a video here). Of course the crowd shouted for more and they obliged. They sang the endearing “Yakap sa Dilim” which is a paean for calling it a night (I caught this one on video, too).

You know it’s over when their family came from backstage and hugged them. Then they group hugged and made a graceful exit. A lingering thought is saying to me, about facing the final curtain on career, that the best part of it is when family (the prime reason why we earn money for a living) is there waiting for your return.

Huwag Masanay sa Pagmamahal was a duet between Danny Javier and Pinky Marquez not Kuh. Thanks.

Hi, thanks for the comment. But I'm pretty sure it's really Kuh Ledesma. :D I Googled for lyrics and some mention "Kuh". I'm revisiting the song now and the voice is distinctly Kuh Ledesma. :D