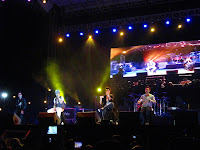 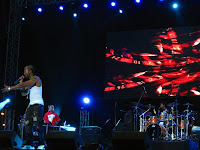 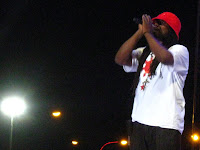 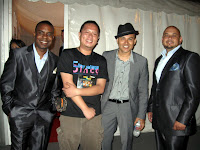 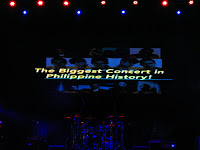 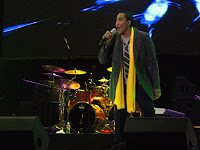 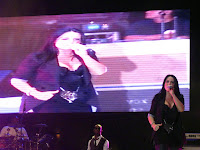 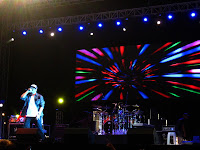 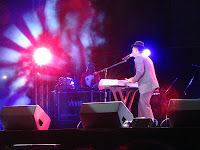 My original plan for May 15 was to have my fifth Pahiyas in Lucban. Unfortunately, it didn’t push through because someone backed out. And fortunately, Jeman (yes, our Playboy event access) offered two free gold tickets to Then & Now Massive Music Festival at SM Mall of Asia Concert Ground. It’s a concert featuring nine international artists mostly from the 90’s (read: Diana King, All-4-One, PM Dawn and SWV). Minutes after receiving the good news through text, I offered the other ticket to Plurk friends but to no avail. Got no other 90’s person in mind but Abre. So, done.

In between front act (a certain R&B artist named Myrus) and the first performing artist, Jeman gave us two VIP tickets and off we rushed to do “ober da bakod”. Here’s the line-up:

1. V Factory – This group represents the “Now” part of the concert. A definitive boy band, complete with boy band choreography, they sang three or four songs which I just heard for the first time;

2. TQ – The night might be really hot as the female species of the crowd cheered when this artist took off his shirt in the middle of his act. He, by the way, popularized the hiphop-ish song “Westside”;

3. PM Dawn - Remember that song with Spandau Ballet’s “True” at the background? It’s called “Set Adrift on Memory Bliss”. He sang it along with three or four other familiar songs. He was wearing three stars and a sun shirt;

4. Diana King – Of course everybody knows “Shy Guy” and that Burt Bacharach remake from “My Best Friend’s Wedding” called “Say A Little Prayer”. Her live rendition was simply awesome and of high energy;

5. Frankie J – Another artist who’s not that familiar to me. The only song I recognized from his repertoire was his R&B version of Extreme’s “More Than Words”;

6. Baby Bash – When he joined Frankie J in a duet, I started to rest for a while and stargazed. Vince Hizon was there with his wife and he was celfone camcording the whole act. Francine Prieto was behind us while Mikel Campos was just a meter away. On the other side of the fence were Raymond Gutierrez and some girl friends. Cheska Garcia just passed by;

7. Jojo – While waiting for her band to set up, Jeman grabbed me and walked me into the backstage pass area. There I met some of the artists up close. We tried to get in Diana King’s makeshift room but the bouncer stopped us. Private time, he said. We saw Diana chatting with Keith Martin. Beside her room were two of the guys from All-4-One and Frankie J. Jeman asked for a picture so I obliged (as if I didn’t agree with the idea). Back to the VIP area, we only finished three or four songs (which were mostly Beyonce-ish for me) and left the venue;

It was past midnight already. That meant more than four hours of standing up and enduring the cranky audio. Sorry to the two remaining artists, I must say. It’s just a consolation that while driving away from the venue, I heard All-4-One singing “I Can Love You Like That”. Not bad at all. As Jeman quotes a SWV (one of the last two artists) song lyrics, “I get so weak in the knees I can hardly speak. I lose all control and something takes over me.” 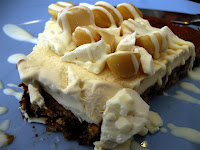 SIDE TRIP: Before the concert, we tried this ice cream shop at SM Mall of Asia called Sebastian’s (near IMAX). It’s a local store but a bit expensive. The one I had was frozen pizza with macadamia nuts and chunks of white chocolate (P195). Dinner at Spam Jam with sandwich and lemonade for P72. Surprisingly enough, they only have three meal choices: a sushi-like serving, sandwich and the one with rice and egg. Post-concert hang-out at Barcino Wine Bar in Greenbelt 2 with two bottles of Estrella Galicia and Croquetas de Marisco (really, really yummy chewy dish with crabmeat) and Calamares Romana (soft because it’s more sautéed than fried) as appetizers. My wallet had to say bye-bye to 600 bucks. In two separate tables were Sam Milby, John Pratts, Angelica Panganiban and Derek Ramsay, and Anne Curtis, Luis Manzano, Solenn Heussaff (?) with three other artista-looking companions.

More pictures here.
Posted by Manuel Pangaruy, Jr. at 4:04 AM