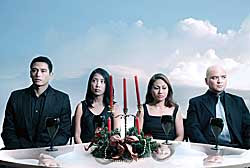 Photo is taken by my Facebook buddy Jojit Lorenzo, a stage, TV and movie actor and a brilliant photographer. Check out his photoblog at http://lorenzophotokitchen.blogspot.com/.

I am just thinking of how to best put into one blog series a play and two movies that I have seen for the last two weekends. Since I’m not really a fan of short entries, I came up with the common denominator between the three: women. And since it’s the love season, why not romanticize the object of every seducer’s code “warm heart, cold mind” as a way of paying tribute to all the Eves out there.

In this PETA play by Tony Perez (of the Cubao series and Spirit Questors fame), women are pictured as decisive and thinking individuals. The complex and perplexing play is part of a trilogy about love (the other two are “Oktubre, Noong Tayo’y Nagmamahalan Pa” and “Nobyembre, Noong Akala Ko Ay Mahal Kita” which I haven’t seen or read yet). Though the material deals primarily with schizophrenia (which, figuratively, every lover should suffer), it has a small plot of three characters, two males and a female who are best of friends. During college, the two guys loved the girl who had to choose who would be the lucky one. She thought that whoever gives her the most symbolic birthday gift would become her boyfriend. The other guy gave her a big set of Kisses while the other, the one she chose, gave her a piggy bank. After years of marriage, the lucky gentleman went to work abroad and later on closed the communication with his wife. The wife then turned into the other guy’s company and ended up being impregnated. This is the same timeframe wherein the lucky gentleman, after a long hiatus, returned to his wife, his pregnant wife. The other guy let the wife choose. She chose her husband for the simple reason that he is her husband. The other guy left.

And the audience heard a gunshot from a closed door. A new pair was introduced. Almost the same treatment to the first woman but this time, it looked like everything was in limbo. Everything was not clear. The other girl seemed to be the granddaughter of the first couple. With her was another guy. Based on their conversation, their pairing up was forced or out of consent. This blurry part made me think and think big time. This part of the play got me hooked.

After more exposition, the last act revealed that everything was just a product of schizophrenia. The other guy did not commit suicide but opted to work abroad. He even agreed to keep this identity as the father of the woman’s child. He suffered a lot but moved on.

OK. The synopsis itself is hard to summarize. What more the fireworks of symbols that its director Nonon Padilla (probably, the best theater director we have around, of the same reverence with Dulaang UP’s Jose Estrella) had devised. Personally, I love the poetry of it all. Imagine, they put a mini-pool underneath the stage to represent “water under the bridge”. One of the scenes required the lucky gentleman to submerge into the water. This served as his healing, as he “crossed the bridge” of sanity. Then there’s the main “woman” who was wearing a funny looking flower costume and some stunts that may not be easy to digest. A Q&A segment was included in the whole play experience as most of the students in the audience made their room to clarify issues that puzzled them.

I congratulated Nonon Padilla after the play. I told him that he is the reason why I support the Philippine theater scene. He is such a genius. Hopefully, the stage keeps him until his Clint Eastwood days.
Posted by Manuel Pangaruy, Jr. at 7:05 PM