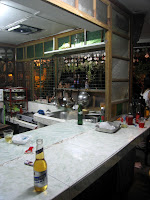 I recently found my new place in this world. It’s called Cubao Expo or simply put, Cubao X. As the name suggests, it’s located at the heart of Cubao, just along the bus terminal near Ali Mall and beside Pure Gold (the mall formerly known as COD).

It’s there for more than two years now. It was called Marikina Shoe Expo before (the bold sign can still be seen at the side of the building). The street where it is located is called Romulo Avenue. On top are two giant Cubao Expo signs, enticing you to get in. No entrance fees, no inspections.

The place is like a U-shaped avenida of hip stop-and-shops. There’s a hopia counter, a beer booth and the Italian resto called Bellini’s that is used in the film “One More Chance”. You can also find Heritage antique shop having a window decorated with old Pinoy film stills (I want that!). There are also some stalls called Breathing Space (or is it “room”?), Reading Place, an old school ukay-ukay shop plus other artsy-fartsy space for photography and visual arts. At the curve, there’s Mogwai Bar to enjoy a Saguijo-like atmosphere.

When I went there last Saturday (alone!), there’s an event for lomo lovers. There was a series of bands performing as if sky’s the limit. Night market stalls for Christmas shopping were also put up until midnight. I bought a pin with a Philippine flag on it, accentuated by the words “Multiply Pilipinas”. That’s for P40. I had a bottle of SMB Light (for 35 bucks) and roamed and observed the people. For a long time now, I felt at home and surprisingly at peace.