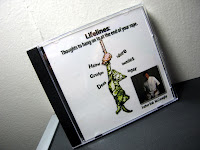 After the mass ended yesterday at Greenbelt (I was already out of the chapel and very much eager to visit Music One), a familiar voice was broadcasted. It came from a priest who I admire a lot when he was still a resident presider at the chapel. His name is Father Bob Conaghy or simply Father Bob. He was promoting a CD called "Lifelines: Thoughts to hang on to at the end of the rope". It was a project conceptualized with Richard Merk and it basically has some talks from Father Bob discussing miracles, love, death, humility and Jesus (with original music from Tito Fuentes). It's effective and very calming to hear especially if you're toxic and tired. The proceeds will go to some medicine for our brethren in Eastern Samar. In case you're eyeing that Kris Aquino-narrated CD, think again and try this album from Father Bob as you're helping both your self and your Bicolano kababayans. A copy costs P300.
Posted by Manuel Pangaruy, Jr. at 11:47 AM