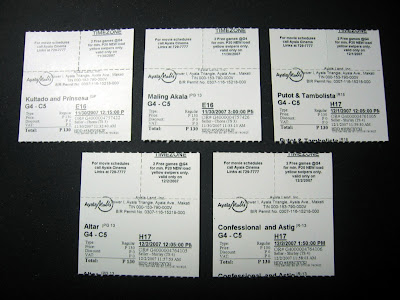 It wasn’t as successful in terms of attendance as this year’s Cinemalaya (or even Cinemanila) but still, Cinema One Originals Film Festival has the balls to challenge the mainstream and to offer the movie buffs an alternative avenue. I hope other media companies like GMA-7 or the Ayala Group could open doors to our thriving film artists (many are still untapped unfortunately).

Last long weekend (November 30 to December 2), I went to Glorietta 4 to catch a film or two a day. Another screening was being mounted at Trinoma also on the same weekend. This year, Ayala Malls sponsored the festival while the very first one was at SM Megamall (no idea about last year’s). A film costs P130 (a bit pricier compared to Cinemalaya’s P100) and there were five “originals” to watch. Just a little background, Cinema One funded each film for a whopping P1M (Cinemalaya offers only half of it).

Below are my two cents (in chronological order that I saw them):

PRINSESA – I was reminded of a film poster for “Palindromes” about an obese girl facing a jungle but I think the two are different. This film by Lawrence Fajardo of “Kultado” fame is about OFWs told in a very subtle and not-the-usual tale of oppression and melodrama. The father who finds a contractual job abroad realizes that his daughter’s obesity is his absence impregnated. Of course, the ending is predictable. What’s not predictable is the nonexistence of a talky script. The first parts (roughly 15 minutes) are executed with less words and just images of a father trying to move on with the help of his sister, his daughter and a granny without even explaining what’s really happening. Oh, the power of images! If only mainstream directors could appreciate this advantage of executing “silent” scenes. Acting-wise, the cast delivers well including Romnick Sarmenta as the father and Hopia (I forgot her last name) as the daughter. Shamaine Centenara and Archie Adamos provide a great support.

MALING AKALA – The plot might be thin but I still appreciate this latest film from the same team that brought us the highly acclaimed “Inang Yaya”. First, the location, a fishing village somewhere in Pampanga, was transformed into a Venetian paradise, complete with the iconic “San Marco” dome and the rigger-less boats that pass to and from the fish ponds. That alone is worth the ticket. As for the cast, I am not sure if Victor Basa can deliver (Jodi Sta. Maria-Lacson is always a safe choice). He reminds me of Ariel Rivera when first made a break in “Nandito Ako” with Aga Muhlach and Lea Salonga, very raw and amateurish. The false assumption in the film allegedly is Victor’s character to be straight. These two folks met in a bus and they acted like a couple with Jodi’s parents as audience. Before the film ends, Jodi’s character caught Victor’s character making love to a fisherman. This is where the film hits a lump in the throat. There’s too much “planting” in it even from the very start and the twist doesn’t come as a surprise. Just the same, the movie boasts of beautiful cinematography and some commendable close-up shots.

TAMBOLISTA – This is my brave bet as the festival’s best picture. It’s very Pinoy, very Brocka but not very artsy. The film tackles a sad and tragic story of a teenager who is saving up money for a drumset. That’s basically the film’s main plot but it is cleverly juxtaposed with other subplots about the main protagonist’s brother with a girlfriend who undergoes an abortion, a friend in search of meaning and a pair of noisy oldies who fight about anything nonsense. The film is done in B&W and color (red) only appears when there’s a bloody scene (complemented by Khavn’s effective musical score of mostly drumbeats). I don’t understand the significance of this over the material but that’s fine. The three lead actors (Jiro Manio, Sid Lucero and Coco Martin) deliver a great and occasionally natural performance. Sid Lucero, who played a disturbed comrade, won the Best Actor award. Jiro Manio might have provided a more heartfelt characterization but Sid has made sure that he is “present” in every scene that he’s in. I can also say that this is Adolf Alix’s best work as a director (though I haven’t seen his “Donsol”).

ALTAR – There’s something unusual about a Rico Maria Ilarde film. I’ve seen his “Sa Ilalim ng Cogon” and both films have a script that makes all the speaking lines very intellectual. This might not work on some characters that do not require eloquence and sensibility but just the same, the script is fun to see coming to life. This suspense film still carries the same scare tactics popularized by blockbuster films like “Feng Shui” or “Sukob” but it has its own unique charm. It must be the urge that is seeded in every moviegoer to look what lies beneath and go beyond the extra mile in uncovering the unknown. The good thing is that it doesn’t have to explain much. It created a world that doesn’t have to be conceivable. The last scene having Zanjoe Marudo crying over his new duty as a “guard” while looking at his loved one (Dimples Romana) through a small attic window is memorable.

CONFESSIONAL – This is the festival’s Best Picture. I prefer not to contest that for the film is very enjoyable and finely crafted. Right after watching this film, I concluded that two new filmmakers are now born and will be joining the roster of our talented young bloods. Technically, I have high praises for the film. It’s fresh and clearly a total experience for film buffs. Watching the film is like listening to a hip band performing live while enjoying a bottle of beer. Never-before seen images, infectious OST, cutthroat editing, what more can a cineaste would ask for? Unfortunately, beyond all these overwhelming goodness, the film didn’t move me.
Posted by Manuel Pangaruy, Jr. at 11:22 AM