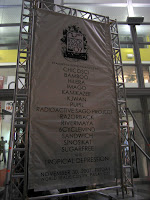 Thursday wasn't really that good. I was freaking out at the reception area of NU 107, talking to a lady boss over my mobile. That was lunch time and I had only an hour to claim the tickets that Gian, an officemate, had won after an online voting. It was also raining and the cab that brought me to Ortigas was caught violating a No U-Turn sign at The Fort. I was hungry and mad. Eventually, I got the tickets, said sorry and thanked the people from NU. There was a misunderstanding but that was easily forgotten and I was happy that I will be rocking the World Trade Center for the 20th NU Rock Awards on the next day. 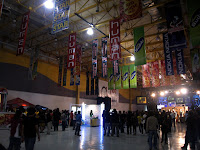 There's nothing fancy about attending THE event. There was a queue and the security inspection was thorough. By the way, the night before, DILG declared a midnight-to-5am curfew all over the metro and the nearby provinces. Thanks to our dear Senator Trillanes. I saw a bin at the entrance containing cigarettes and lighters. Minutes later, I got in and it was cozy at first. I went directly to the "mosh pit" and tried my luck to reach the frontline.

Well, I didn't know that awards night like that also has some front acts. Marcus Highway and Gayuma performed one song each. A beer drinking contest killed roughly 10 more minutes then a big lull came. There was only Sir Francis of The Dawn Indian sitting in the middle of the stage (was he hugging his guitar the entire time?), no whatsoever. That lasted for a about half an hour. But there was no boring moment as events like that are normally filled with wisecracks.

I didn't notice when the event really began but the alleged opening number was the national anthem on guitar solo played by Sir Francis. I am not sure if that was politically correct. I was informed before that our Lupang Hinirang should always have the original areglo. Dad even joked me one time that Fred Panopio was arrested after singing his famous "Yudolehehoo!" at the end of the national anthem. 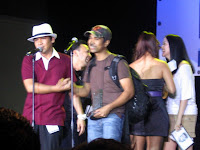 After "that" number, the awarding went on. The event followed a pattern. First, two or three celebs or band members or models introduced a band that was about to perform. Then another set will announce the winner of a certain rock award category. So it's intro-performance-award then intro-performance-award. The first award was the Drummer of the Year award (was it?) which went to the drummers of Rivermaya and Bamboo. It's nice to see that these two drummers who came from two splitting bands (now it's three with Rico Blanco as solo artist) were now making beso and all smiles. Too bad that "idol ng bayan" Joel Salvador of Chicosci didn't make it. Damn! I even recorded that segment on video. Tsk, tsk, tsk. 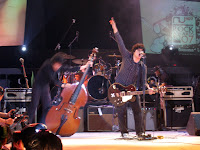 I can't remember the sequence of the performances now but I can say that the highlights include Raimund Marasigan of Sandwich doing the "dive" with aplomb, Miggy of Chicosci being hairpulled just like a Nazareno, Marc Abaya borrowing a Philippine flag parading and waving as if reminding us of what could have happened at the Manila Pen, Bamboo having a jam of a lifetime with Buklod singing the most fitting song for the night ("Tatsulok"), Kat of Sinosikat? after receiving the Vocalist of the Year trophy commented with "I didn't expect this" while the crowd agreed "Kami rin" and of course the ever snob and now pretty boy looking Ely Buendia doing a number as if "wala lang" as usual.

If my memory serves it right, here are the rest of the winners: Song of the Year went to Typecast's "Will You Ever Learn", Album and Album Packaging of the Year for Orange and Lemons' last project "Moonlane Gardens", Guitarist and Live Act were awarded to Bamboo, Hilera also got an award as well as Reklamo (the last two bands are eyed as the next big thing for 2008).

And that was my very first NU Rock Awards. I hope to see Gian soon to thank him personally for the experience. I also have to confess that I sold the other ticket to an scalper for a hundred bucks.
Posted by Manuel Pangaruy, Jr. at 10:14 AM