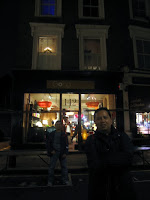 Monday. Emotionally exhausted from a day’s work, I turned on the TV and voila! “Notting Hill”!

If asked what is my favorite Julia Roberts movie, if there is one, this must be it. She plays a superstar in the film which doesn’t require her to try acting much. Hugh Grant is as English as a tea. But maybe it’s not just the pair that fires up the giddiness in me. It could be the OST as well. I love Brit pop. It’s so melodious. No wonder they don’t have much rap artists in the UK. Rap is sometimes, hmm, not a music (get back to me once an American Idol finalist has done a rap song as a contest piece).

Anyway, the film is one of those romantic movies that preach about love having no formula. It talks about love as a non-thinking entity, something that cannot be calculated. As another film “Kinsey” best puts it, sex is quantifiable and love is not.

Well, for the second serving of the film, I still adore it. Now I start to notice how frivolously the script was written, from the common Briton characters down to the crispy lines like “surreal but nice”, “funky God!”, “no, thank you, I’m fruitarian” and “it’s not Jane Austen, it’s not Henry James but it’s gripping”.

It’s so good that some local filmmakers even copy the concept: the female character on a wheelchair (“Kahit Isang Saglit”, I forgot the name of the actress who played it), the tight shot of two lovers admiring a scenery (“Don’t Give Up on Us”, Juday and Piolo looking at the Banawe Rice Terraces) and even the plot (“Kailangan Ko’y Ikaw”).

I don’t usually watch a film twice but now I’m attuned. I simply love “Notting Hill”. Maybe I should get a DVD copy. Or maybe I should revisit the time when Hubes, Josh and I struggled looking for the bookshop (Travel and Books, Co.) in Notting Hill’s Portobello in London. What we found was an antique shop. We were informed that the stall was constructed only for the film. It was a busy street, very tiangge. It’s funny to note that every female fish-seller in the area claimed that she is Julia Roberts. For the prettiest one among the lot, I replied with “…and I’m Hugh Grant”. That didn’t work. Damn bloody hell!
Posted by Manuel Pangaruy, Jr. at 3:10 AM

so 'wag mo nang gagamitin. hahaha. for the record, wala pang nagwo-work na suggested pick-up line for me. maybe i should start doing my own thing.