Dream with a Z 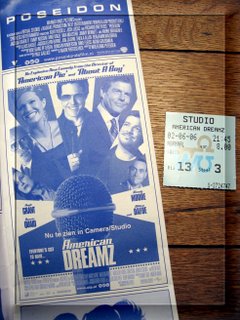 It’s past midnight. I just had a banana (something from Dole – Costa Rica, I checked the label when I grabbed it from Albert Heijn) and a piece of Sky Flakes (courtesy of Toko Asian Store).

I just got back from watching a film entitled “American Dreamz”. It wasn’t really a nice bicycle ride though I caught my self singing “Inside Your Heaven” while pedalling along Oude Gracht (one helluva Greenbelt 3-like street situated just beside the city’s inner canal). It was only in the middle of my journey back to my apartment when I realized that I haven’t turned on the bike light. This is required here. One time, Leah, an officemate and the Manila delegations’ great declaimer, was stopped by a group of police officers to warn her that she hasn’t set on her light. “Set”, meaning there’s no switch somewhere in the bike. There’s this thing in the front area that you have to push on to let it touch the wheel. So as you cycle, the light is fueled, announcing to the officers that you respect Dutchability.

Now I’m confused. When I got out of the cinema, I was having an impression that I partly like the film. Now the euphoria has vanished a bit. But for sure, I did not appreaciate the film because it has Mandy Moore and the subplot between her and Hugh Grant’s character is, hmmm, too glossy and misleading.

“American Dreamz” is from the director of “American Pie” and “About a Boy” (Paul Weitz). You won’t be surprised that the cast (a great one at that) is comprised of, from “American Pie”, Chris Klein, the Asian guy in the party with Sherminator, Steve Stifler’s mom who ended up in bed with Finch, etc. plus of course, Hugh Grant from “About a Boy”. But that’s not all: it also boasts of other Oscar hopefuls like Shohreh Aghdashloo (a Best Supporting Actress nominee from “House of Sand and Fog” and was recently seen in “X-Men 3” as one of the “cure” scientists), Willem Dafoe, Marcia Gay Harden (a winner from “Pollock”, Best Supporting Actress) and Dennis Quiad (I am not sure if he has been at all nominated in an acting category). You won’t regret it if you forget Mandy Moore.

Here’s the thing. The film is a satire, a genre that really fascinates me. It is supposed to poke fun at the hit TV show “American Idol” and all other things American. Hugh Grant is Simon Cowell who opens the film with a divorce scene. Mandy Moore is Carrie Underwood-ish. To complete the lot, the US President, played by Dennis Quaid, with that George W. Bush aura, is going to be the guest judge. Just a backtrack. Prior to the TV appearance, the President seems to be needing a break after winning the election for the second term. He doesn’t want to meet the press and was forced to skip reading the newspapers. He is being “directed” by his political adviser played by Willem Dafoe who thought of having the President’s appearance at “American Dreamz” as a sweet comeback.

What makes the film a riot is that it has another character, a Mid-Eastern contestant named Omar. He was an Afghan-Iranian Border Training Camp kick-out (who was eventually evicted to the Orange County) and was puppeted to get into the “American Dreamz” final two, meet the President and explode. Omar has a gay cousin (I forgot the name but surely he provides the film’s most LOL moment for me along with that Bo Bice spoof named “Bobby” singing a too clisheish rock song) who helped him transform into a somewhat competitive contestant. Omar’s finale song was “My Way” which led me to consider that there’s at least one Pinoy in the storyboard think tank.

I won’t be sharing with you guys that the twist has Chris Klein (Mandy Moore’s character’s loser ex-boyfriend) blow off with Hugh Grant in front of national television. I promise, I won’t.
Posted by Manuel Pangaruy, Jr. at 9:58 AM