Edrikinetix: How I Manage to Believe that Friendship Still Exists in the Workplace 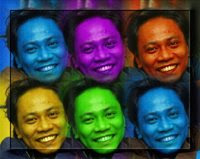 E – Energy. As in the absence of it. Ang Frederick Pagaduan na kilala ko ay walang lakas sa mga bagay-bagay na walang engganyo para sa kanya (he sometimes attends mass because he’s fascinated with the songs sung by the choir). Well, except for “K”. He will just remain seated and do other things like working, smoking, chatting and grinning (“smiling” is too angelic). Let me have a U-turn. Energetic din si Edrik kapag alam n’yang agrabyado ang mga kaibigan n’ya. He won’t offer his life but I can assure you that he will try at least. He has his way of comforting you by saying evil things to the other party (na “nagmamaganda”), something to my delight, of course. Pwede ring “E” for “Energia”. As in Edrik’s first post-hybernation project for SPL (Edrik, Xen and I share the same SPL anniversary: April 1). But that’s corny.

D – Deadma. Again, this is related to “E”. But wait, he could be “deadma” but the next thing you know, he’s sharing all your bloopers to his bes’s (bestfriends). Hindi mo s’ya mayayabangan dahil baka mas mayabang pa s’ya sa ‘yo. Edrik is the best Humility 101 professor. At paki-rebyu rin pala ang ‘yong English. He’s biased to Mapuans. Hahaha. To rephrase everything: if you’ve made a grammatical error, he’s just “deadma” especially if you’re nice.

R – Raket. Sa dami ng raket ni Edrik, siguro 10% lang ang nasasagap ko (or worse, it could be less). But I prefer it that way. I don’t wanna know the rest. I might not have the belly to digest everything. This, of course, is segued by the grinning during work or the early “eskapo” after office hours. Don’t be surprised if you invite him out (especially those events which are not “the best things in life”) and he will reply with something like “titingnan ko”. One time, inindyan n’ya ang panonood ng “Kailangan Kita” with Arissa (that’s between the time when we already purchased the ticket and the start of the screening) and when Onin and I got him into watching Steven Soderbergh’s “Full Frontal”, we lost him in the middle of the film.

I – Intelligence. Sige na nga, he’s one of the most intelligent persons I know. He mentioned one time that his IQ is above average (he took one of those online tests) and I believe that. When we were contractors at SPL, Arissa and I call him “Henyo” and that makes him blush big time. I don’t know how he does it but it gives us a perception that his face is turning red.

K – ‘yun na! Here’s a tip: is he’s sad and you’re privileged to observe that, talk about “K” and everything will be all right. You know those black muscle shirts that Simon Cowell always wears on “American Idol”? Edrik has lots of it and he’s wearing one every Friday. I coined a fitting term for that fashion statement: motel shirts (though some people close to Edrik suspect that there’s no difference between a weekend and a weekday, baka nga raw mas discounted kapag hindi Biyernes). But wait, I have to defend him. The good thing about Edrik is that he’s not all “daldal”. He’s not a walking machismo. He’s not the type who starts shallow conversations like “dude, may nakita akong chick, kasabay ko sa bus…”. Edrik is someone I know to be a master of that field (as Vistan is to guns and Topeng is to jokes and a little of “K”) without him saying that he is. Sometimes I just know.

To sum it up, Edrik is not Edrik without “K”. It will just be Edri (probably with a mom named “Edna” and a dad named “Ricardo”).
Posted by Manuel Pangaruy, Jr. at 11:42 AM

I know 'K' coz I'm Kristoffer.