They Close Their Eyes When They Sing: Notes on Jaime Roos Concert 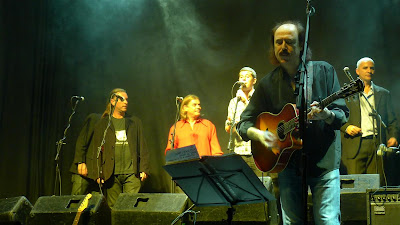 Five days after the Roxette concert, I watched another music event here in Montevideo. Thanks to an Argentinean officemate who invited us to watch Uruguay’s legendary singer Jaime Roos. The same manager who instructed me how to go to Velodromo declared that he is the country’s most popular music artist (so popular that his songs reach the neighbouring South American countries). I got no clues other than that. I just went with the flow.

And here are my notes:

1. The place this time is not as big as Velodromo. It’s a bar similar to Metro Bar or Laffline in size and it’s called La Trastienda. Tickets have seat numbers so we were accompanied to Table # 10 the moment we arrived. The table is slightly bigger than a family pizza and six of us were sharing it (four from our group and a couple on their 60’s). I think the idea was just to have a beer or two (plus empanada). Everybody was facing the stage and given the set-up, it’s very crowded. Officemate commented that it’s close to being claustrophobic;

3. They did not start on time but the wait was worth it. Jaime Roos, probably on his late 50’s, is balding but sings really, really great. He’s a guitarist, too, and he smiled very generously. I’m not good at describing the genre and let’s just say that it’s a typical Uruguayan music (so they say) complete with candombe on the side and an all-male back-up singers;

4. There’s a lights-off in almost every song number. They also have a 15-minute break which reminds me of one mockery that Martin Nievera did when he mounted a concert at Greenbelt Onstage two presidents ago. After some songs, Martin announced that there will be a 10-minute intermission. Curtain fell, lights were on and people started to locate the toilet. Then in a beat, Martin came out and took some pictures of the audience. He said, “Where can you find a concert with a break?” and continued singing;

5. The all-male back-up singers, when doing nothing, were not onstage. They stepped out occasionally, something that is Greek to me;

6. Yes, they sang with their eyes closed and they looked happy while at it. What were they imagining?;

7. Photography was allowed but no videos. Officemate attempted but Jaime Roos himself made a comment in local dialect about a patron trying to camcord a song; and

8. After the concert, people lingered for a while. This normally happens after a play. I noticed that some of the musicians were there with the crowd. We headed home instead, mind-effing the idea of scoring a Jaime Roos CD.