Day 03: Of Wayna Picchu and Acrophobia 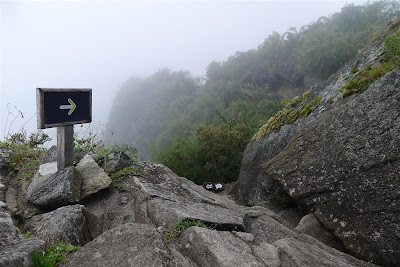 We were advised by the hostel staff to queue at the bus station as early as 4am if we wish to climb Wayna Picchu but we didn’t follow that. We underestimated the other tourists and thought that they might wake up a little later than us. Breakfast was already served at 4:30am so we grabbed the chance to have another quickie meal before joining the queue. Surprisingly, a long line was already waiting for us. My estimate was that there were around 150 climbers ahead of us. Coffee and sandwiches were offered by the vendors, that’s a good thing if you wish to have your last-minute breakfast. It was dark and drizzling at the same time.

At close to 6:30am, we were already at the entrance to Machu Picchu. Park authorities were head counting. They allow only 400 visitors a day for Wayna Picchu and it’s divided into two groups. The first 200 are allowed to begin the climb at 7am then another 200 at around 10 or 11am. We were caught off guard when the staff announced that we three were the last ones on the first set (to the wailing and violent reaction of those behind us). That gave me a sign that I should probably do Wayna Picchu (I was still unsure the day before because it gave me chills every time I looked at the high mountain at the back of Machu Picchu). Topeng assured through a staff that it’s gonna be an easy one-hour climb and that it can be done by your lonesome (meaning the trail is safe).

We logged in at the starting point (there’s a guard house there) at 7:20am. The one hour trip was only to a certain point but the peak can be reached in 2.5 hours. Since I was already there, I decided to still go for the challenge. First few minutes were easy-going. Paths are narrow but there are some ropes on the side if needed. Foggy mountains were everywhere and it’s a pleasure to experience nature that grand. After 20 minutes, there’s a point that connects Machu Picchu and Wayna Picchu and that’s where my real adventure began.

The descending steep path leading to Wayna Picchu from Machu Picchu can give you a hint of what’s in store for you. That’s the time I realized that it’s not going to be an easy climb (at least the ground staff was right when he said that the trek can be done alone). People ascending can be seen from there and it’s going to be endless. Ten minutes from that point on, I surrendered to the idea that I can’t keep up with Topeng and Nina so I asked them to go ahead without me. Lots of climbers passed by me but I was taking my time. At least I had a temporary company and they were very nice. One guy even volunteered to carry my little red backpack but I declined (primarily because my food and water were there). I stopped a hundred times. A few more minutes and my legs started to sore and I felt that lack of a decent and heavy breakfast wasn’t helping. It’s a steep climb of paths made of rocks and Rio Urubamba below served as a reminder of how high I already was. Just like the route to Inca bridge, only going up, there’s no support facing the ravine.

Tired and with a little courage, I reached the first part of the portal made by the Incas. It’s a platform of soil supported by rocks at the edge and can be explored by going sideways. Machu Picchu can be viewed from there. Some were resting while others were having a puff. But the peak is still far from there. The whole structure leads to a cave in which I didn’t know how I managed to get out. It’s a one-way ticket from the cave. The moment I crawled out from it, I knew I had to start taking care of my acrophobia. I didn’t see much support underneath like a safety net or another platform. It’s like one big mistake and you’re history. One couple got me connected (the guy is Arab-looking and the girl spoke Spanish really well). They confessed that they took a picture of me while struggling myself out of the cave. They helped me cross one critical step leading to the peak.

My mindset when I reached the peak was how the hell I would climb down. On the first sturdy platform, I saw how people descend. It’s a narrower step and slightly steeper. I was scared and proud of it. I didn’t enjoy the peak much and I even forgot to take a Hipstamatic shot for my Project 365 Days. I remember saying “hi” to Topeng and Nina (who were having a grand time with the view) but I just continued going down to finish the whole thing. I found a nice spot to photograph Machu Picchu from there but that’s about it. I started the climb down through the narrow path just opposite the other path with a cave (got no other choice), with my behind hitting the rocky steps, sit-crawling the whole she-bang. At one point, I had to rely on a crack to cross the path while praying big time. As far as I can remember, there were three long narrow paths that I endured. Some were with company of trekkers that added pressure and some, all by my lonesome. Until now, I don’t know how I made it.

The rest of the descent after the Inca platform was not as challenging. My mental note then was not to look at Rio Urubamba below and it helped. Halfway through the trek, I turned my iPhone on and played Mishka Adams. Why her? Her latest album has a mix of English, French and Spanish songs. I was just trying to connect with the people I met along the way, either those who were going up or Machu Picchu-bound like me. I greeted the climbers good luck and one British girl even commented “Thanks but I wish I have your music.” Another Asian-looking girl joined me in resting at a spot near the destination. She was trying to figure out my nationality.

See a video here of climbers on their way to Wayna Picchu.

The first glimpse of the guard house made me celebrate. I really made it and decided to hang out in the bench there to wait for Topeng and Nina and to dry my socks out. Good to have seen the people there, jubilant with their finish. Mostly Spanish-speaking but I had the chance to talk to an Italian couple with a nice DSLR (they asked me to take a picture of them and the guy was such a perfectionist). There was also a Thai family where the head of the bunch mentioned that he just visited Cebu and Bohol for business and pleasure. A Japanese guy came out while videotaping himself and another big guy rushed on his way out as his elbow was bleeding. I waited for an hour more for Topeng and Nina but they probably decided to prolong the experience further (I caught up with them on my way out of the ruins). I just killed the time by exploring the “city” of Machu Picchu and took more pictures. 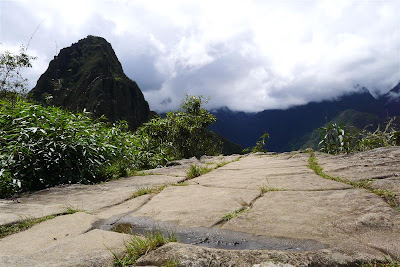 While resting at a spot overlooking Wayna Picchu, some silver lining came by:

1. In every mountain, it is the climb that matters most;
2. You’ll get by with a little help from some friends no matter how temporary;
3. It is not always fun at the top;
4. You can only see clouds from the top and not those that make you commit mistakes;
5. Struggle is, first and foremost, a personal thing;
6. Ropes are there for a purpose; and
7. The whole process of trying to hurdle a mountain is not entirely scientific. Sometimes you need faith and a little luck.

The rest of the tiring afternoon were spent eating a cuy (a guinea pig!) and alpaca (or llama), getting our bags back, checking emails for the next hostel and visiting the hot springs (I opted to stick on the net and skipped this one) right before we met up again for the train ride back to Ollantaytambo at 6:10pm. During the trip, there’s a devil dance called “sacra” right in the aisle of the train (video here) which was very amusing. They said that during Holy Week, God is not watching in which I beg to disagree after accomplishing the Wayna Picchu climb.