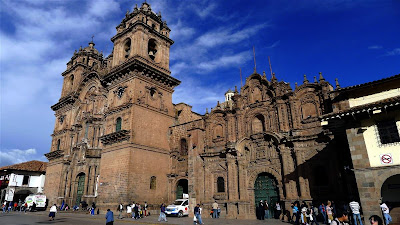 Between Uruguay and Peru, there’s only a slight difference with time. Two hours for the record. Though I woke up at around 4am, it didn’t hinder me from adjusting with the high altitude in Cuzco or to starve for energy at the end of the day. Everything went well in the morning. The remise taxi picked us up on time and all flights were on schedule. We had our quickie lunch at Lima on our way to Cuzco so we’re all packed for our first day in Peru.

We reached Cuzco at close to 3pm. It was sunny but the temperature was around 15 degrees according to our taxi driver that brought us to the hostel. We picked the cab, by the way, from a stand that says “official airport taxi” only to find out later that we had cheaper options if we get out of the airport and just hail one there. They charged PEN 30 for a 15-minute trip (PEN 25 cheaper if we’re smarter). Misters Inka was not a busy hostel. I didn’t see any other occupants but that doesn’t mean it’s empty. The portero was very nice and very accommodating. He had us wait in the small lobby for a few minutes while the airport taxi driver was trying to make a deal for a day trip. We declined. A bowl of dried coca leaves was waiting for us so we served ourselves with a hefty cup.

Once settled, we found ourselves prioritizing the payment for Machu Picchu and bus tickets. Reservation online was easy but paying it up is another story. At 3:30pm, we went directly to Calle San Bernardo. It was Holy Monday and a procession at 6pm prompted the office to close early. We were then advised to go to Direccion Regional de la Cultura which was very difficult to find as the door is not along Avenida de la Cultura but in one perpendicular side street. The very friendly female staff told us that they don’t accept payment. The office is probably for reservation only or for other tourist information. She told us to go to Interbank along Avenida del Sol instead, marked our map and gladly offered to get a taxi for us as time was running out. We also asked where we can secure a bus ticket and she told us to visit Banco Nacional. Topeng and Nina chose to go to Interbank and I volunteered to arrange for the bus tickets (the two banks are only a block apart). I wasn’t successful. Banco Nacional, it turned out, is not aware of such bus ticket payments. A staff in one of the booths told me to visit the Consettur Office (as mentioned in some websites). I took a cab, braved the traffic as the procession was about to start, only to find out that the office closed early. Got no choice but to go back to Avenida del Sol (still on the same cab) to meet up Topeng and Nina who had their own share of struggle with the ticket. Our Machu Picchu reservation happened to expire already so they had to beg for a reconsideration (in which they were successful).

At past 6pm, the area surrounding Plaza de Armas was already crowded. Some roads were closed. We explored the plaza once more, burping with a street food called “tamales” (which is like kamoteng kahoy with stuffing), and took pictures of the twin churches (the Cuzco Cathedral and Church of the Company of Jesus Christ). As the procession was about to reach the cathedral and started to get crowded by the minute (a proof here), we were already inside the Paititi Restaurant near the main square having a shot of Pisco Sour.

I fell in love with Cuzco at dusk. The area surrounding Plaza de Armas in cobble stones has a small European city feel and it seems everything can be explored on foot. The house lights from the mountains looked like stars had paid a visit to the town. We didn’t get a chance to get inside any museum or a church but a view from outside was fulfilling enough. The path leading to Plazuela las Nazarenas beside the cathedral was a mix of history and simple joys. Some were selling cheap bonnets and gloves (we got our official Cuzco get-up there) while some kids were playing football in a patio (check out the video here).

We slept at around 11pm, fighting back the thing called high altitude sickness specifically the shortness of breath. Oh, the price of falling in love.