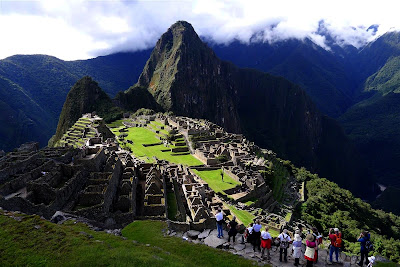 I remember waking up uneasily at 2am and tried to sleep again for two more hours. During shower on a cold weather, I was panting heavily. Good thing soroche (high altitude sickness) had no other impact on me. We packed up early as planned and the other portero in Misters Inka prepared a breakfast for us with scrambled eggs and bread with butter. At 6:15am, we checked out already and found ourselves trotting our way to Wanchaq train station where a couple of busses were waiting. The ticket we paid for actually was a Poroy (Cuzco) – Aguas Calientes route but due to some maintenance, a bus sent us to Ollantaytambo instead (it’s in the middle of Cuzco and Aguas Calientes). From there, we took an Expedition seat in Peru Rail Train # 33. The seat numbers for us were messed up so I was trapped in a group of eight Brazilian family members, having a drink or two.

The whole trip was a great experience on its own. View from the two-hour bus trip alone was amazing (grab a seat on the left side). Cuzco is higher than Ollantaytambo so our descent was a mix of picturesque valleys shadowed by some clouds and a peek of the snow-capped mountain called Veronica. The train ride took another two hours of slow and relaxing pace. Its coaches are designed to let the travellers enjoy the view (a ravishing river on the left and mountains on the right). Order a complimentary coffee from the crew to complete the experience.

We reached Aguas Calientes at lunch time. The map that we got online for Green Nature (our inn) was incorrect. The stationed tourist police assisted us to locate the hostel. It’s got free Wi-Fi (just like Misters Inka) and a storage that we can use in case we need to leave early and just come back to pick up the bags. Our room was on the third floor. Bed sheets are colorful and the window is facing not another big mountain. Opposite is the train station so it’s helpful when you need to rush back to catch a trip.

After munching some “international” cuisine and chicha (a grape juice-looking drink from corn), we headed our way to buying two bus tickets (one for that day and another for the next day). Busses to Machu Picchu leave almost every 10 minutes (or when it’s already full). The rough and winding trip took roughly 20 minutes. Good view. And some thrills every time the bus had to maneuver to give way to another bus.

At around 2pm past, entrance to Machu Picchu was still crowded. We presented the receipt for the payment but they asked us to show our passport as well. The big map outside wasn’t that helpful for us as everything looks overwhelming. We didn’t get a guide, too (one offered for PEN 100 and we refused). In the area, you can find some arrows that serve as route for the visit. One is heading to “integral” or long path while the other will lead you directly to the Inca city (we chose the former). There we experienced our first “exercise” as we needed to have a short climb to the guard hut. Most postcards of Machu Picchu are probably taken from there. Visitors were everywhere, either within the city or from our vantage point.

One arrow was leading to a certain Inca bridge. We’re clueless what’s in there but we still trekked it nevertheless. It took us around 30 minutes of walking along a narrow path without any support whatsoever from the side. The acrophobic in me was kicking in but at least I had Topeng and Nina with me. The end of the route happened to be just a piece of wood that connects two sides. Below it looks like a wall built with properly arranged rocks. We tried our best to figure out how the Incas managed to put those rocks considering the ravine underneath. Were they hanging? Topeng was brave enough to get near it with the help of a rope installed at one side.

On our way back, Nina was on the lead then Topeng at my back. The father and daughter team that we met near the bridge was ahead of us and they were warning us on something. We thought that they were just fooling us until we saw a llama feeding some grass in the narrow path. We stopped because the moment we attempted to pass by, the freewheeling animal might have a trip on us and decided to kick us down to Rio Urubamba meters and meters below us. We stepped back and hold on to some grassroots (our dear life) and waited for the llama to walk past us. And it did, not mindful of anything but his meal.

Some videos of Machu Picchu here, here and here.

We left Machu Picchu at 5pm (with our passports stamped and dated with a Machu Picchu seal!) and spent the rest of lull time to scout for souvenirs. I also got the chance to explore the main square which was more festive compared to the main road. I sneaked in three postcards for mom and dad, my brother and family and my housemates in Makati. The post office is just on the left of the small church. Dinner was another highlight as we tried this artsy place called Indio Feliz. Cuisine is a fusion of Peruvian and probably French but it’s the ambiance that makes eating more delightful. The walls on the main restaurant are covered with business cards while the bar in our area has lots of drinks to choose from. They also have free Wi-Fi.

Bedtime’s at 9pm or a bit later. Temperature was very much different from Cuzco so we had a ball resting and preparing for the big day.