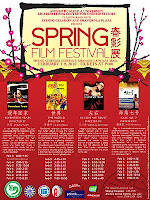 Hands down, Chinese Spring Film Festival is so far the best film festival held at the Shang Cineplex. There are only four films to conquer and the sweet part is that it’s not for free. Sorry if this may sound selfish but I appreciate the absence of long queues and ineffective ticket distribution. And on this note, I wish to thank and congratulate its sponsor, the Ateneo de Manila University Ricardo Leong Center for Chinese Studies in cooperation with the Ateneo Celadon, for a job well done.

As for the four films, viewed in the following order:

1. Zhang Yuan’s “Seventeen Years”. This sets the mood for the stretch of the film festival. It’s a tale about healing told through the life of a female character who killed her stepsister. The title implies the number of years she got imprisoned. I’m not good with scripts but this one seems to have a missing body. It tells the dilemma on the first half then resolve it on the second half. For me, it still works. It’s a bit talky (read: less visual) for a drama but it explodes on the last few minutes. Well acted and well directed.

2. Jia Zhangke’s “The World”. I was reminded of our very own Cinemalaya films when I saw this one. The texture, the ambiance and the rawness, very comparable. The film is one of those with multiple characters (my favorite) with intertwining stories. It’s set in a theme park that boasts of replicas of the world’s famous landmarks like the Eiffel Tower, London Bridge and even Manhattan (complete with the pre-911 World Trade Center). It may look fake but the stories roaming around it seem real and breathing. The occasional animation adds spice to an already compound take on love, life and agony.

3. Wang Xiaoshuai’s “In Love We Trust”. Would you make love to your ex-husband/wife just to save your child’s life? This is the moral question posted by the film as it explores the dilemma of a mother and the people close to her. But the film has more to show. It’s muted for a drama. It never overwhelms or overloads even though it has a lot of plot turns. I also saw Beijing in a different light and how progressive it looks with those high-rise residential buildings pestered by the quiet stories underneath.

4. Wei Te-Shang’s “Cape No. 7”. This is probably the weakest among the lot. For sure it’s not included in the line-up for nothing. I heard that this was Taiwan’s highest grossing film last year and that explains its being too Star Cinematic. It’s a simple love story bordering to rom-com about a male character who, I assumed, has a not so good past with rock music. It’s also a bit making-of-a-band and a bit travelogue complete with pop OST and the humor that is too familiar. I’m good with the music and all but I felt disintegrated with the heartwarming part. Perhaps a better editing could help.
Posted by Manuel Pangaruy, Jr. at 10:08 PM