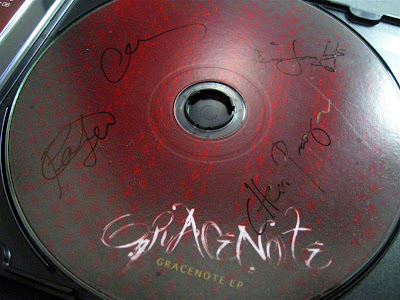 Gracenote is a promising pop punk band composed of Eunice Jorge (vocals), Chen Pangan (vocals/guitar), Alvin Ortiz (guitar) and Jon Pichay (drums). The drummer was sick during the mall show, prompting me to watch their gigs soon to get his autograph. Eunice’s brother Jazz joined them on guitar that afternoon (and if I’m not mistaken, most of their gigs) and generously signed my CD as well.
Posted by Manuel Pangaruy, Jr. at 5:47 AM